Mary Meeker says that India’s Mobile usage of the internet has surpassed Desktop usage. This is where I pause to let you splutter and choke. 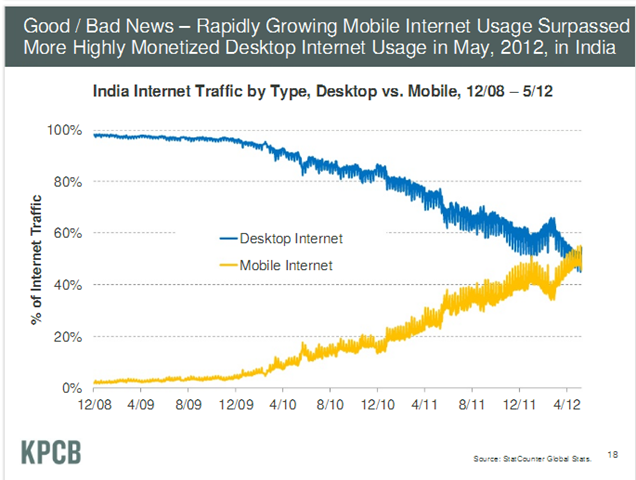 I don’t believe this number one little bit. For one I have been complaining for a while that most Indian sites don’t even gracefully degrade to the mobile (Notable exceptions are Flipkart, ClearTrip, TimesOfIndia and yes, even Capital Mind 🙂 ) For another, this makes no sense – none of our mobile plans even have decent unlimited internet plans. I have been a mobile data user all the way back in 2003 (I was one of the first ever customers in Bangalore to use data on the phone – so much that Hutch even got me featured in a Businessworld article)

The source is “Statcounter Global Stats”. I have statcounter on my blog so I know that they collect stats through both javascript and web (though whatever hits their stats image, I guess). But obviously, they don’t collect the large amount of traffic that flows through apps – I use Gravity and YouTube on my Nokia phone and then a large number of apps (trading, twitter, youtube, bloomberg, etc) on the Android. These won’t even get recorded by StatCounter, even if it was installed on all the web sites of the world, which it isn’t.

So we’re down to web traffic, not internet traffic. Let’s assume that, and even then I believe these figures are WAY out of line. Why? Because, from Statcounter, this is the distribution of web stats for April 2012. 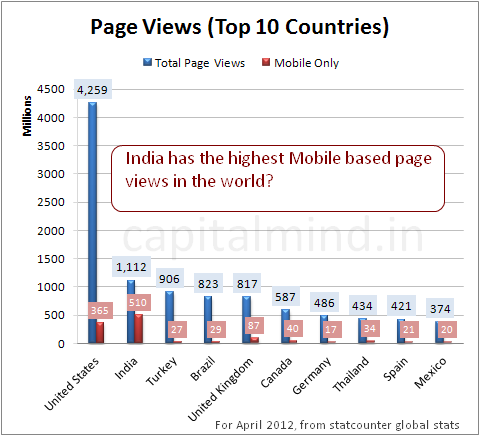 So India has the second largest page views overall, but the highest number of mobile page views in the world? This is not just surprising, there is something black in the Mulligatawny.*

(* Transliteration of “daal mein kuch kaala hai”, which is like “doesn’t add up”. )

Let’s look at percentage shares – how much does mobile contribute to total page views, according to Statcounter? 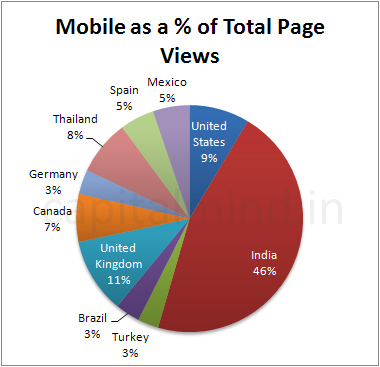 Hardly any country – save Zimbabwe and Nigeria – have a percentage as high as India.

And then, let’s look at usage trends according to the Indian Telecom Regulator TRAI (Dec 11 data) 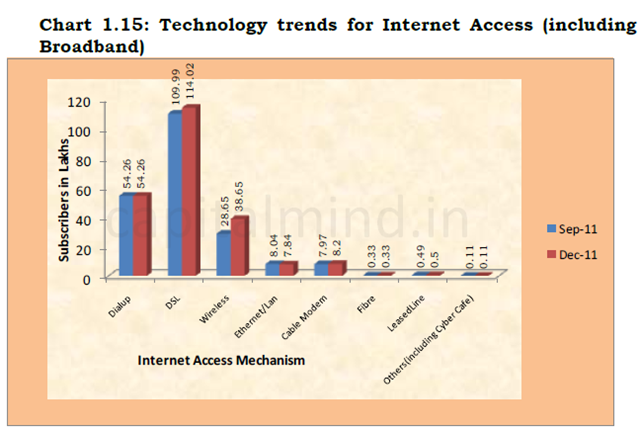 Going by this, there are about 4-5 million web users on wireless and 12 million broadband users (there may be more actual users, since TRAI measures connections, not actual users).

Somehow all of this doesn’t add up – I doubt that we had 510 million actual mobile users in India (imagine, nearly 40% more than the US). In all probability, there are some bots setup to go download data using a mobile browser user-agent (which makes a statcounter think there is a mobile request), perhaps because the mobile content is easier to scrape (lesser ads, no interstitials etc) – and this might be originating from India.

But regardless, the number of users using the mobile to access the internet is increasing at a rapid pace, and web sites need to get ready to serve content to a smaller screen (and tablets!) and create the ability to tap newer ways to interact (swipes, pinches, and other types of multi-touch). I’m not quite ready with the stuff at Capital Mind yet, but something we are building is getting there.