The Cabinet Committee on Economic Affairs has increased Minimum Support Prices for Kharif crops of 2012-13 by upto 53%. Jowar goes up by 52-53% while the lowest increase is of Paddy at about 15%.

This increase is on top of a big increase last year, despite a fall in area sown. (See: Chart – Paying Farmers More to Sow Less) 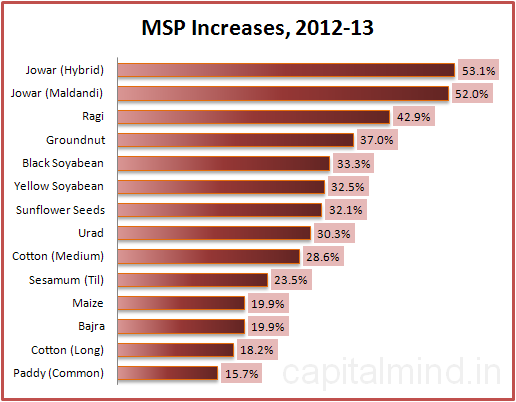 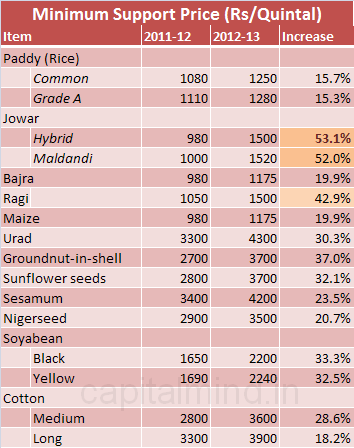 Checking current wholesale prices shows that mandi prices for many items are lower than the MSP suggested. For example, Bajra today (June 15) is at an average price of Rs. 1050 per quintal, even though the MSP increase to Rs. 1175 was notified yesterday. Paddy (Common) is at 1080 in the market. Jowar (Maldandi) at today’s prices is still Rs. 1000 per quintal.  However some other items (Soyabean for example) trade at higher levels – that may be due to seasonality (prices always jump during April to July because of the harvesting timing).

What an MSP increase will do is to create a floor price as time goes by. That means a level prices may go above, but won’t go below easily. Makes sense: why would a farmer sell at the mandi at lower if the government is willing to procure for higher? Even if there is oversupply and the darn thing has to rot away at a warehouse paid for by you and me?

Note also that the Food Security Bill will increase the amount of food procured, taking the food subsidy above the level of the current Rs. 75,000 cr. Remember that Mr. Pranab Mukherjee, our FM, had promised to keep subsidies under Rs. 200,000 cr. (or 2% of a shadily calculated GDP). We’re already doing half of it on food, there is at least 50,000 cr. in fuel and then the fertilizer and other such subsidies. I doubt we’re making it.

I’m sure the Sainath types will come out defending these prices but we are being terribly short-sighted in my opinion. We should be cutting all subsidies: fuel, food and fertilizer (the big items) and increase the allocation to education, healthcare and roads.

If China builds bridges and knocks them down to sustain GDP growth, we buy food and let it rot. Same difference. Making GDP grow, one quintal of rotten food at a time.