Notice: The green line is not changing its slope. The inflation in the system is tight and continuing to haunt us and the long term trend remains firmly up.

Data Suckage: Revision of 0.80%, biggest in the last one year

We now have a March 2012 number revised upwards. Notice how the revision changes the aspect of the trend then. 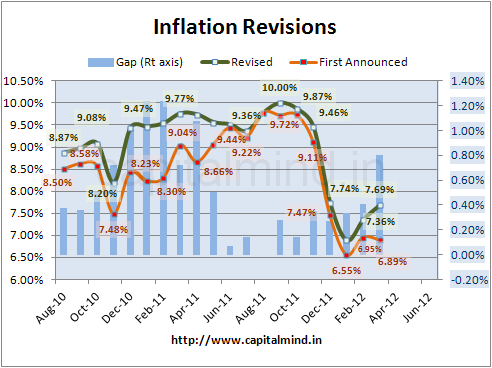 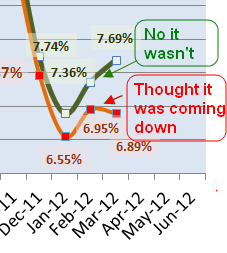 Also, we’ve gone back up to the massive revision times of 2010-11, when inflation was much higher than initially reported. Are we going to go back to 9% soon? Already, Consumer Price Inflation (CPI), a more relevant indicator for retail usage, is in double digits (10.36% in April) and new data will come in on Monday. It seems like Manufactured goods is easing, it lags the primary and fuel inflation numbers by a few months. When those numbers remain about 10%, it’s difficult to imagine that secondary items (Manufactured goods) will stay benign.

WPI is under the 8% RBI repo rate, which is less than the 10% CPI. The slope of both inflation indexes are upward. There is no base effect left any more.

But the country is not run by economists. It is run by politicians. I think we’ll get our rate cut, even if we don’t deserve it. But will you trade it? There are Greek elections over the weekend, and the whole world is going nuts about the wrong party winning; should that happen, whatever happens to our rates will be irrelevant, at least from a short term point of view.

All this points to stagflation.