The Great Indian Data Suckage story continues. GDP data from MOSPI (the agency that reveals data) recently brought growth down to 5.3% and it turns out there is something really shady about that as well. From the chart: 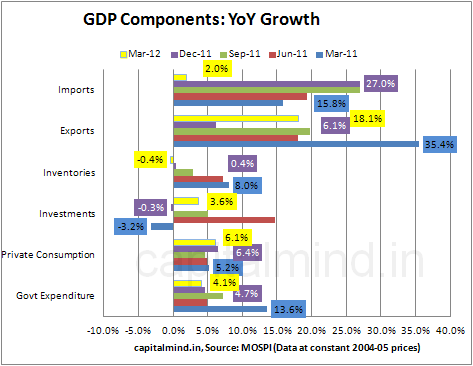 It’s obvious that Exports add to GDP while Imports subtract from GDP.

Export Growth (Real, that is, inflation adjusted) was shown at 18% while Imports supposedly grew at 2% only.

That doesn’t match the data sources we have. The Ministry of Commerce provides data every month, about goods exports. That data is in the RBI Bulletin and in the Commerce Min press releases , which I’ve used to collate export data: (here and here)

GDP data includes both Goods and Services Exports, so the “Difference” must be the Service exports.

Service export-import data is in the Balance Of Payments Report, which is released with a one quarter lag by the RBI. We won’t know the March 2012 quarter service data until June 30, but we can take a guess that it won’t be hugely different from earlier.

Which means we can extrapolate from this, and say that by and large, service exports (largely software and consulting services) amount to about 50% of goods exports. Service Imports are about 20% of goods imports.

The Jan-Mar Quarter shows Service data (the Difference Row highlighted in red above) as HUGELY off the earlier numbers. Service Exports, according to MOSPI’s release, were 69% of goods exports, while service imports were only 15% of goods exports.

This doesn’t quite match the earlier numbers. Plus, if we had a massive export boom in Q4, we would have noticed it somewhere – in software exporters numbers (nearly all numbers show benign growth) or in massive bonuses from consultants or such. The dramatic drop in service imports (From 122,000 cr. to 15,000 cr.) should have shown in Travel, Transport, Financial or Business Services – companies should have gone bust spectacularly if such a fall was true.

Given that MOSPI has been wrong many times earlier, let’s assume they’re wrong this time and recalculate GDP.

If we redo the calculation so that GDP growth uses actual figures, we get something startling: Consider that to arrive at “real” growth we must reduce the GDP number by a deflator. It’s complicated to calculate the actual deflator, but let’s assume the same deflator that the MOSPI used (which is based on the Wholesale Price Index or WPI). That deflator is about 6.92%, and corresponds approximately with data of the WPI in those months. (6.89%, 7.36% and 6.95% for Jan/Feb/Mar respectively)

If true, India is slipping into recession. We’ll probably never know because no one ever tells us how these figures are arrived at, and there is so much money laundering in the export/services route. But what it does mean, regardless of whether you agree with the R word, is that the situation is much worse than they’ll have us believe. Our growth – though positive – is still lesser than inflation, and that means we’re shrinking.

1. You might say that listen, we need to do this calculation and adjust March 2011’s figure (of last year as well). My preliminary calculations show that the same calculation applied to 2011 would actually increase 2011 GDP. Last year’s figures are understated, it seems. Note that there has been an upward revision of 27,000 cr. in the import number (which takes down last year’s GDP and thus increases the GROWTH number).

2. I might be wrong, so please correct my calculations if you have data that is more accurate. All data is from public sources (RBI, MOSPI).