I write at Yahoo: Why the petrol price hike is a good thing

Petrol prices were raised again recently, by Rs. 7.5 and the hike leaves the country seething, except those that drive diesel cars. And to make the diesel owners wince a little, the government will decide the fate of that fuel too, in a meeting soon. While there is outrage about this "unprecedented" price hike, let me play devil’s advocate and temper down some of the most vehement arguments against this increase. 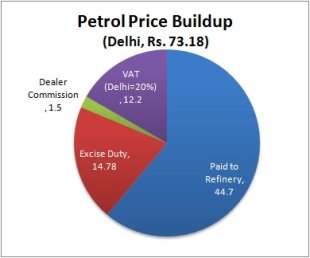 With a tax of Rs. 26 per litre, can they not reduce taxes? Goa, for instance, has cut state taxes to zero; this gives the Goan petrol pump the ability to sell petrol at Rs. 61, a good Rs. 12 less than the Delhi price of Rs. 73. How, though did the brand new Chief Minister, Mr. Manohar Parrikar do it?

He replaced the lost revenue on petrol by increasing taxes and fees everywhere else. After the monsoon session, you will have pay a toll tax just to enter Goa. Alcohol will be more expensive. A power of attorney that used to cost Rs. 25 will now cost Rs. 500. A 10% luxury tax now applies to beauty parlours. Cars get more expensive with entry taxes, VAT increases and higher road taxes.

So do you really want that, fellow Indians? That the government cuts taxes on petrol and diesel, and instead makes it more expensive for you to do anything else? Goa made the grade, and has not yet seen the impact — of lower consumption due to the higher taxes. Other states, which are more dependent on the fuel revenue than Goa, might not be able to comply. Regardless, it is highly unlikely that we’ll stay wedded to a low petrol price if it means higher taxes and prices elsewhere.

State VAT is only one part of the tax problem — a larger chunk is the centre’s "excise duty" which adds Rs. 14.78 to the petrol price, and which if brought down could make life a little easier for those of us that travel in petrol vehicles. So why can’t the states and centre cut taxes together?

The central government isn’t earning much more than it did, and if you take away some tax revenue, the gap between income and expenditure — a wide one already — will widen further.

The second argument then is: the government needs to spend less. That it does. It spends a lot of money just paying the oil companies for their taking losses on diesel and kerosene. In effect, a portion of what it collects as tax on that fuel goes back into paying for the losses incurred on these fuels. Yes, the government could cancel them out — reducing the subsidy while at the same time cutting taxes on diesel. But that won’t touch the petrol price — which isn’t subsidized, and the losses due to a cut in taxes won’t be nullified in any other way.

Why can’t the government cut taxes anyhow? Cutting government revenues is a problem of optics. Imagine being told that you must take a cut in salary, because the government just cut your income tax rate by 20% and inflation is only 10%. This is not acceptable to most people, although they might universally agree that a tax cut puts more in their pocket than earlier. A drop in revenue, for the government, is unthinkable, even if they did manage to cut expenses.

And there’s the political problem of austerity. Spending lesser means cutting government employee salaries, cutting farmer subsidies like fertilizers, reducing the wages paid in the NREGA scheme or otherwise spending lesser on infrastructure. All these solutions have political problems, and the government will do all it can to prevent a backlash in these high-voter areas; petrol users are simply those that have enough money to avoid public transport, but not enough to buy a diesel guzzler, a population that is, by and large, not inclined to vote either. Most unrelated expense items have been cut already, even as the fiscal deficit — a measure of how much more the government needs to borrow to match expenses with revenues — ended up over 5% of GDP.

Prices also give a signal. If you raise prices, you lower demand. And undoubtedly, we need to reduce our reliance on petrol and diesel, which come from crude oil, our largest import. We import around $150 billion worth of crude oil every year, a figure that only increases as crude oil reaches new heights. This increases our trade deficit, and reduces the value of the rupee in dollar terms, which, in the end, makes our petrol more expensive in rupees. Our consumption hasn’t slowed, mainly because we prefer, as a country, to not pass on market prices to our consumers. Effectively, without a price signal, consumption patterns don’t change. Freeing prices may make them volatile, but we have lived with volatile necessities for years — no one, for instance, calls for potato prices to be regulated. Even the search for alternative fuels or the encouraging of cheaper ones like natural gas will not happen as long as prices for current fuels remain subsidized.

On that vein, diesel prices must be increased as well, and LPG. The oil companies lost nearly 140,000 crores (Rs. 1.4 trillion) in diesel, LPG and Kerosene last year, half of which the government must bear.

Petrol prices may come down anyhow. The calculations above reflect a crude price of $124 in April, which has since fallen to $105 recently, even as the rupee touches Rs. 56 versus Rs. 53 earlier. Net of the above, petrol prices can fall to nearly Rs. 64 per litre, without any changes in state or central taxes. But that shouldn’t change the view that prices need to stay deregulated. After all, when international prices go down, we won’t like the argument that they can’t cut prices until they make up for past losses.