This is probably in light of RBI’s defense against the rupee fall to nearly the 54 levels against the dollar. When the RBI steps in to sell dollars, it buys rupees that then go out of circulation. Just a $2 billion dollar sale – what might be enough to bring the dollar-rupee level to stability – will take out about 11,000 cr. (110 billion) of liquidity out of circulation. In order to not (eventually) stress the liquidity bazaar, the RBI has decided to replace the dollars sold with Indian government bonds instead, a strategy I regard as highly useful.

Lots of commentators think this is faulty but please note the distribution of the "asset" side of RBI’s balance sheet, currently, is: 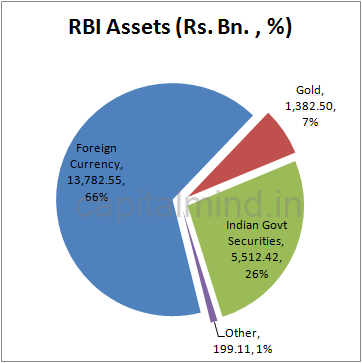 Moving some money over to the Government bond side will not hurt us. Note that adding 120 bn rupees from the forex area to the Indian securities area changes the ratio from 66-26% to 65-27%, that’s all.

One standard issue of concern people seem to have is: but if RBI sells those dollars, how will we repay external loans? Answer: We don’t need to have as many dollars as we need to pay external loans. And never all at the same time. This concept doesn’t apply in banking at all anymore – if all depositors asked for their money back, the banking system is screwed. We understand that, and live with that. So what if we don’t have all the dollars to repay? If we need it, a player can use rupees to buy dollars from foreign investors that are coming in, and then pay back. The government’s foreign currency marked debt is miniscule.

Overall, we need to make the rupee fully convertible. The RBI’s actions need to impact the currency a lot lesser. Yes, the current account deficit is wide – heck, the trade deficit is 10% of GDP! But we can’t change that by doing things like RBI selling dollars. Note: the trade deficit – i.e. imports minus exports – is over 8.8 trillion rupees (lakh cr.) which is $170 billion. Our forex reserves are just $280 bn or so. We absolutely cannot bridge the trade gap selling dollars – we have to cut imports or increase exports. One easy way to do it is to find out what we import most – Crude for example – and see why India buys more despite the rupee cost going up. If the answer is subsidies, then the answer to rupee depreciation is to cut those subsidies.

We also import a heck of a lot of gold. The reason people buy gold is because they don’t trust the rupee and the fact remains that inflation has killed the rupee’s buying power (and retained Gold’s, in rupees). Only a sustained long term inflation level of 3% or less will make gold less attractive, and it is really the government+RBI that can destroy inflation together. There is no will because of political considerations – how can you make prices FALL? Of course you can, and we’ll all adjust.

RBI’s dollar sales and then, OMOs are a short term solution, like duct tape.