The Reserve Bank of India cut interest rates by 0.5% overall, in order to help stimulate flagging growth. The repo rate (at which banks borrow overnight from the RBI) which is now at 8%. 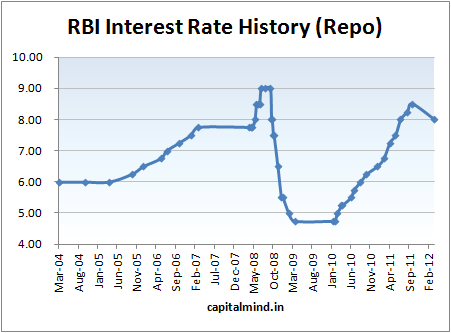 The 50 basis point (one basis point is 1/100th of a percent) cut is a big one – markets expected a 25 basis point cut. After halting for nearly six months the RBI has reversed the trajectory of changes. After raising rates 3.75% over 1.5 years, the RBI has started the cutting cycle.

But in the macroeconomic policy statement, the RBI has mentioned a few things:

While this is noble, and reason enough to cut rates, there are many important notes about inflation:

In the face of big risks to inflation, and that growth has "bottomed out", the larger 50 bps cut was strange. The only thing I can think of is that there is a huge risk of default for banks. Much of bank credit – around 50% – is to the manufacturing industry. The risk here is not really well known (unlike housing or consumer credit) and banks tend to hide bad assets by giving companies bridge loans or changing dates etc. (Take the example of an overdraft, where a bad asset is only if you fail to pay back interest for three months – principal doesn’t matter. A quick chat with a customer can make them pay back just the interest and after a couple days, the overdraft limit is increased correspondingly.)

RBI has mentioned that it sees problems with asset quality. But the 0.5% probably indicates that the situation is worse than we’re being told.

This corroborates with a sudden change in MSF – the Marginal Standing Facility – where banks can borrow from MSF (at 9%) overnight, upto 2% of their net demand and time liabilities (NDTL). MSF used to be limited to 1% of NDTL before the policy. MSF is beyond repo borrowing which is the overnight amount borrowed against collateral of government securities – MSF needs no such collateral.

Why would you increase MSF limits, when liquidity conditions have eased? From nearly Rs. 2 trillion (2 lakh crore) of repo borrowings in end March, with additional MSF borrowings of 10,000 cr., the system has gone down to 80K crore (800 million) rupees of repo and zero MSF. Even the 10,000 cr. was a tiny 0.18% of bank NDTL. (compared to the 1% limit) Why did the RBI bump up the limits? There must be asset quality issues that will hurt certain banks if they don’t have access to liquidity beyond the current limits.

This is intriguing, and it’s just the beginning. Of the rate cut cycle. Or something else more sinister.