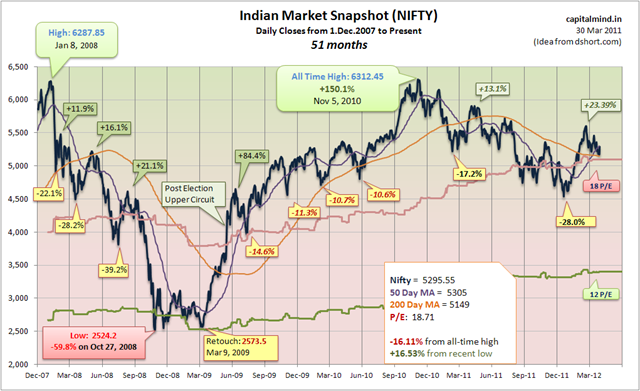 In what was not a great financial year for the overall market, FMCG outperformed by going up nearly 25%. From HUL to Godrej Consumer Products to ITC. Auto and Pharma did quite well, as did discretionary spends. 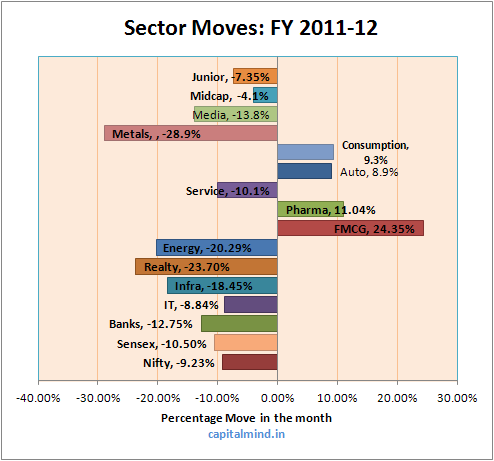 The worst were Metals, Realty and the Infra/Power spaces. These have been hit hard, and if you stayed out of these sectors you most likely outperformed. Even though the dollar has fallen over 15%, the return from the IT pack has been negative. Midcaps fell a lot but have recovered substantially since December.

What’s next? Fundamentally, the coming quarter isn’t expected to be all that great in terms of results. Inflation has come down, but prices remain high (just that they’re not going higher?). The budget was at some level expected – that the government would raise taxes. But it has introduced a lot of uncertainty with respect to taxing investors that come in through Mauritius, or the GAAR provisions or otherwise. Even though they might bridge some of the deficit, the budget estimates are very optimistic in assuming that oil prices will fall (and thus reduce the oil subsidy by 35%), or that the GDP will grow nearly 16% nominally next year.

The dollar is back at 51 and our trade deficit is nearly $150 bn already. Much of this is oil, and unless we increase the domestic price of oil, we won’t stop using it, but there is no political will to let prices go up.

There is a liquidity problem at the bank end with huge government bond auctions coming our way from April. Repo borrowing is now running at nearly 200,000 cr. (2 trillion) every day, and recently banks have been tapping the MSF (Marginal Standing Facility) window which lets them borrow even more than they are allowed to, at 9.5% per year. Ultra short term mutual funds are returning nearly 11% now. The chances that RBI will cut rates in its April meeting are, in my opinion, 50-50.

But the situation in the US looks nice, and Europe to it’s credit is not cratering. That situation may change, but happy money from those countries is flowing in for now.

Technically, the market remains clustered within the 50 and 200 day moving averages. An indicator I use shows no real trade: 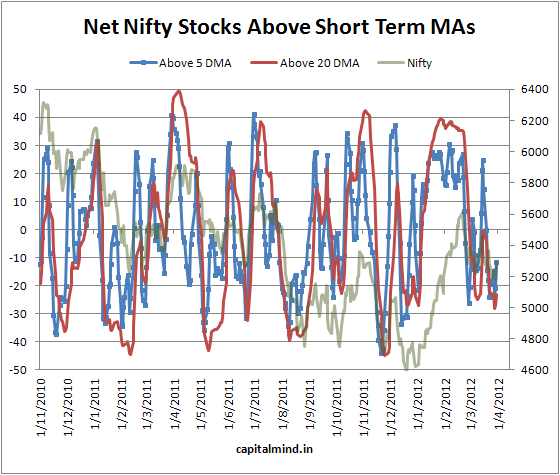 The trade is only at the extremes, and if anything, the risk-reward is greater on the upside. (Never trust your beliefs more than the price 🙂 )

At the long term level there’s no extreme either: 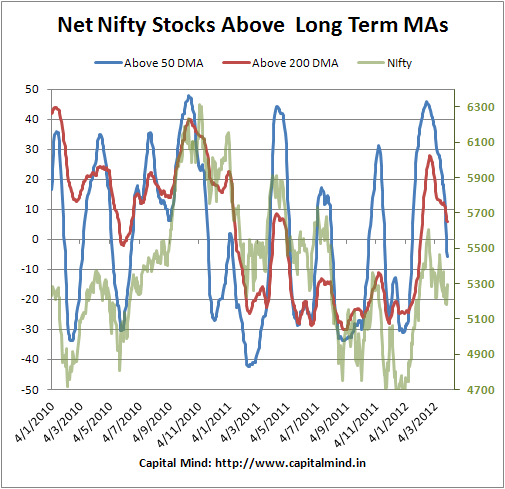 The Wait and Watch strategy works for me as I move to Bangalore this week. Posting will be very light – and after my massive set of charts for the month,  I might lay low for a while, as I try to find a house and a school and get my life back in order. Happy trading and wish you all a great financial year ahead.