This is from my pre-budget Yahoo post, now updated a week later with post-budget values.

In the run up to the budget, and a few days after, the markets have reacted differently. The average budget day move, since 2000, is a tiny 1.08%. But that masks the volatility that the budget has seen, in both directions: 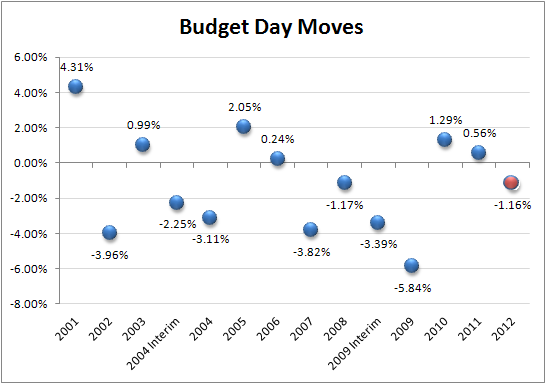 In the last two years, budget days have been incredibly benign and positive. In those budgets, we have expected, and got, tax cuts in various measures. In 2009, the expectations ran away, perhaps, as the markets toppled after both the interim and final budget presentations.

But are budgets usually positive? If you look at the budget moves from one month earlier to the previous day of the budget, and then onwards to one month after, is there a clear picture that emerges? 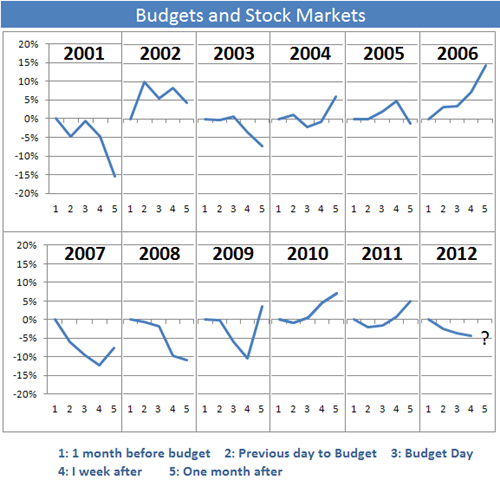 Note: Graph updated for 2012, except for one month later, which is not going to be available till April 16.

There is no single direction the market has taken after the budget, based on its trajectory before the budget. In 2001, while the markets moved up more than 4% on budget day, they ended up falling 15% more in the subsequent month. The 2006 budget saw a flat budget day, and a benign period prior, and then the market zoomed up after the big day.

This isn’t to say the budget is the only event that influences the market, but it creates a substantial impact. Policies that might be taken positively are:

How much of these can we expect in 2012? While there have been proposals to increase investment limits in areas such as airlines, the big proposal to allow FDI in multi-brand retail has been jinxed by the political play in parliament.

Power projects face a massive problem in coal supply that can’t easily be addressed; roads are being built, albeit at a slower pace than expected, with state governments playing truant in connectivity. There is no water policy of any sort and earlier attempts to create a river linking infrastructure ran into political trouble. The infrastructure industry has been given sops (investment linked tax cuts), guarantees (through pre-defined supply/revenue-share agreements) and easy credit (personal income tax deductions for investors in their bonds, higher priority in bank credit and so on) . If the Finance Minister can find a way to excite us all about how India will have great infrastructure, it will have to beyond the obvious.

We have the worst fiscal situation in about five years, with the deficit going up, inflation remaining stubbornly high and tax collections slowing down. We have not realized quite as much revenue from the selling of stake in public companies — the most recent, like ONGC and NTPC, have had to be "rescued" by the long-term funds in publicly owned insurers. With markets

Tax increases will have to be done, and some of it will even be justified: for instance, service tax was at 12%, brought down to 10% in the face of a global economic crisis. Now that the crisis is behind us, it might make sense to go back to 12%. But going by the vehement opposition of certain parties that currently run West Bengal, any rise in the tax rate is going to be a big challenge, at least politically. The one change that might give markets some joy is the removal of Securities Transaction Tax (STT), a long standing demand of those that play stocks on a daily basis.

Nevertheless, it will be a challenge to create a budget that excites stock markets, and increasingly, politicians are looking towards market responses as a vindication (or rejection) of their policies. This is a dangerous trend, as stock markets are given to panic and euphoria without thinking. An innocuous statement can be interpreted as a major policy change by the over enthusiastic anchors on TV, which will then spread like wildfire even as everyone calls it breaking news. (what news is not "breaking" nowadays?) The result: markets move violently in either direction, and we see a barrage of interviews, interrupted-sentences, incomplete debates and needless posturing before there is clarity.

Heart of hearts, we all want a blockbuster budget: one that reduces our tax rates, reduces the fiscal deficit, encourages foreign investment, increases exports and provides money to unemployed rural workers. I think we’ll end up getting only one or two of the above, if we’re lucky.

What really happened: Tax increases were done – back to 12% on service tax and Mamta didi spent all her political energy reversing that tiny rail hike so no outrage was shown over the budget. STT stays. Fiscal situation admitted but likely to be worse than budgeted. No measures for infra, no tax cuts, some attempt to bridge deficit, small measures for FDI, no new transparency initiative.