In January 2012, the Index of Industrial Production (IIP) went up 6.82% from the previous year. Note that this is highly untrustworthy data. MOSPI is notorious for changing data constantly and much of what they say doesn’t corroborate with anything anyone else says, so you should treat it as highly suspect. I print it because it’s considered important by markets and players, so I’ll report. 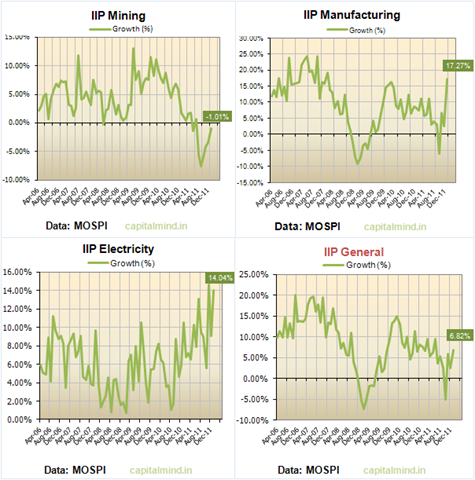 MOSPI has revised the December 2011 IIP from the earlier announced 1.8% to 2.51%, a large upgrade. This Jan figure will also change – revised both next month and then once more in June.

Looked at in a different way, the growth is all in capital goods (which came in at –1.5% but way higher than the –16% last month), and Consumer goods and non-durables. In fact if you remove all the other factors, nearly ALL of the growth in the IIP this month (Jan 2012) was from consumer non-durables. Is FMCG making such a big move?