The headline number for inflation in Feb 2012 is officially 6.95% which will be revised in two months. 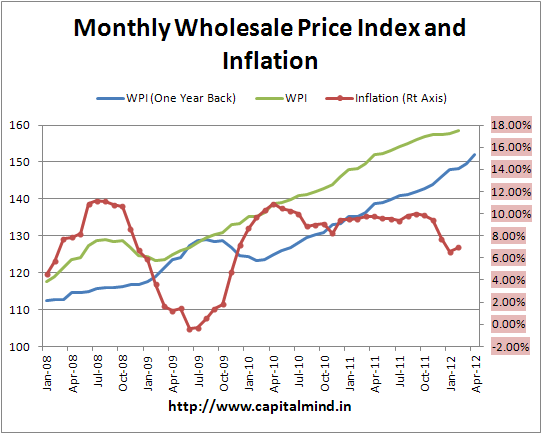 One, that the Feb 2011 index number (last year) was almost flat compared to the number in Jan 2011 last year.

As you can see, the Jan to Feb change is very marginal in 2011, with a large change coming in March and April last year. Watch the blue line in the inflation chart twist up after Feb, with Feb remaining flat from Jan.

Headline inflation for Feb, at this rate, might show a marginal increase as the index was flat last Feb – this data is revealed mid-March.

That brings me to my second point, which is that the overall trend in inflation remains constant, and pointed upwards. This is not a “drop in inflation”; we need the slope of the index curve to drop below the trend. (We are maintaining a trend of around 8.5% inflation since April 2009)

Component wise, there is some relief. With Manufactured goods having the highest weight in the index (65%) and dipping down to 5.75%, there has been a downward push to inflation. I might not believe that figure, to be honest, but so what, this is the only figure we have.

Primary Articles has inched up again, to 6.95%, and I don’t think we should pay any attention to fuel inflation (since it’s all screwed up because of the fuel subsidy the government gives).

Btw, in terms of data suckage: Crude Petroleum prices have gone up over 10% since December, but the total change in our “index” for crude petroleum: ZERO. So yes, pinch of salt and all that.