I write at Yahoo, Diesel Prices Must Be Deregulated In the Budget

Diesel prices are way below the price of petrol for a long time now, with the difference of about Rs. 24 in Delhi (petrol costs Rs. 66). The reason: the government controls the retail price of diesel. Even if the oil marketing companies (HPCL, BPCL and IOC) lose money on selling diesel, that’s the rate they need to sell at.

But this has created many problems. For one, our oil "under-recovery bill" is out of control. With Brent crude at $125 per barrel and the rupee-dollar equation at Rs. 50, the input price of our fuel basket is above Rs. 6,000, among the highest ever. Prices of diesel haven’t been revised up since Jun 2011, when the price of crude was $108, and the rupee was around Rs. 45 to a dollar. Since then, crude has gone up 15% while the rupee has fallen about 10%, which is a near 25% increase in cost.

This difference is currently sitting as a loss on the books of the Oil Marketing Companies (OMCs) who hope, fervently, that the government will reduce it, by first transferring some of it to ONGC and other government owned players, and take the rest as a "government subsidy". The under recovery is likely to be 125,000 crores, and will definitely increase the 24,000 cr. petroleum subsidy provided for in the last budget. With government finances in a bad shape already, the hike in subsidy will increase the fiscal deficit and thus, the cost of borrowing that the government will have to pay to borrow and make up the deficit. To bridge the deficit, the government has to create ways to tax us more, or to spend less.

But this is senseless; it is better to directly tax us by increasing the price of diesel (the biggest part of the fuel under recovery bill) than by this round-about method.

Diesel has become even more popular now as petrol prices have been freed in June 2010, which have gone up over Rs. 18 per liter since then. The difference between the two is near the highest ever. 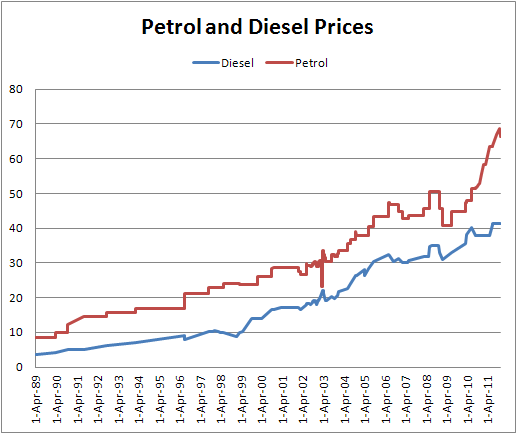 So as a fuel, diesel is far more attractive; but how much? A presentation by CSE India shows that Diesel cars are now 40% of all cars in India, up from a miserly 4% in 2000. Diesel cars are bigger, and have gotten more efficient with technology. They don’t cost much more to make, but because of the petrol-diesel price gap, tend to cost 15-20% higher than the petrol version in the same model of car.

According to the Kirit Parikh Committee report, Diesel use is maximum in trucks (37%) and second highest in passenger cars (15%). This makes no sense at all, as we shouldn’t be subsidizing passenger cars at all. The diesel subsidy is supposed to help the poorest by keeping prices of transported goods (like food) low at least due to fixed transport costs. But as we have seen, food items can see inflation even with a highly regulated fuel price, and there are really too many parameters to such spikes. What we have seen, though, is that the high demand that increases prices also results in lowered demand and changing consumption and production patterns. So if cauliflower is expensive in one season, then two things will happen — a) people will replace cauliflower with something else; a (radish) mooli parantha is just as good as a (cauliflower) gobi parantha, and b) farmers that see those high prices for cauliflower start growing it in the next cycle, resulting in higher supply and lower demand, which kills prices. This has happened with food items over the last year.

That is exactly what we need with diesel. And LPG, and Kerosene. If we let the oil marketing companies raise prices to the point of profitability, and introduce competition from non public entities, we can be sure that fuel use will change. We’ll see people slowing down the use of diesel and petrol in cars, use more public transport, and more importantly, to find other sources of energy. Diesel generators at large apartment complexes will become unviable; perhaps they’ll try to use solar for common area lighting, the more efficient natural gas based generators instead of diesel and so on. The people that suffer will be those in private diesel cars, but it just makes them equal to those with private petrol cars.

On the supply side, we need to create a judicially enforceable act or rule that we won’t go back to regulated diesel prices for the next 20 years. That way, anyone else that comes in and tries to set up infrastructure (Shell, Reliance and so on) can be assured that their investments don’t get destroyed because some minister read Karl Marx and decided to return to the policy of keeping diesel prices unlinked from reality. Plus, we must open avenues for other fuels or energy sources – from easy CNG licenses for vehicle refueling to a proper solar nation-wide regulator.

How then do we compensate bus commuters? One idea is to directly fund transport operators based on miles travelled, through direct transfers. This can be done for goods operators transporting food items as well. That will mean a much lower subsidy since you get the subsidy to only where it belongs (public transport and perishable goods). That will also mean a more efficient subsidy since you don’t have this horrendously complex oil marketing company layer in the middle.

The agriculture piece is a little more complex, but if we try, we can directly compensate farmers based on their produce; again, a direct transfer. Fears of corruption and of siphoning this money need to be addressed by a strong level of transparency where large scams can be detected. (The oil subsidy as it stands today can be siphoned out much more easily and has zero transparency).

The last benefit of removing the diesel subsidy is that the oil marketing companies become more efficient. The lack of competition in the space, and the public funding of losses mean the investment needed to ensure that fuel is not looted or adulterated is not a priority. With no subsidy, and increased competition, you can be assured that will instantly change.

There are calls to simply raise taxes on diesel cars. But that only addresses the symptom, not the cause. A higher car tax is only a onetime cost; a minor increase in the petrol price will probably offset it. Plus, the government still has a big oil pool deficit, the issues with inefficiency and adulteration remain and the mammoth oil marketing companies have no competition.

Unfortunately, the ruling party has just lost elections in major states. They are unlikely to create a sustained policy where the short term impact is that everyone in India will feel higher prices from a fuel tax hike. And the political leverage of controlling fuel infrastructure is too attractive to let go. But the budget sometimes needs to think beyond a single party or a single year, and stem the bleeding of a heavy deficit through unproductive subsidi
es. And in some way, Mr. Pranab Mukherjee will need to tackle this beast.