I write at Yahoo on the recent poverty report:

India may be a poor country but we all differ on what "poor" is. There was a furore last year when a per-capita income of Rs. 32 a day was considered "poor" — because Rs. 32 buys you nearly nothing these days. But that is hardly true if you consider the average size of a household is four, and that this means the per-household line for poverty is Rs. 128 per day. There is a more substantial Rs. 3,800 per month, a figure that most of the people, who were outraged at the Rs. 32 per day, will find their household help earns per month. (And in fact, around what the much-maligned rural employment guarantee scheme provides for one household member for 100 days a year)

"Poor" is what you make of it. At a broad level, being poor means the inability to afford what one would consider a basic necessity or standard of living. What I might consider a basic necessity will be different from someone else’s; if I think access to clean toilets are a basic human need, someone else might argue that there are indeed enough people without clean toilets that have cable TV and refrigerators and electricity in their homes, which makes them not poor. But the divergent nature of opinion doesn’t impact the creation and measurement of a statistic; after all, we follow a Consumer Price Index to calculate Consumer Inflation, regardless of whether we or anyone we know has the 50% expenditure on food that the CPI basket assumes we incur.

So what then is the line between the not-so-poor and the poor? The Suresh Tendulkar committee argues that we must satisfy the needs:

– to be adequately nourished (Eat)

– to be decently clothed (Dress)

– to be reasonably sheltered (Shelter)

– to be mobile (Transport)

Even while these remain core, we will argue on what constitutes decent clothing or adequate nourishment. I think access to power, water and communication is essential to human survival today.

Earlier, this was defined entirely in terms of food and calorie intake. The Poverty Line Basket (PLB) — a set of goods that was needed to ensure that basic needs were being satisfied — had a price tag. Initially, the idea was to cover 2,400 calories a month for rural households (2,100 for urban). The Planning Commission defined the basket based on consumption patterns in 1973-74, and since then prices were taken every year, adjusted to reflect inflation since 73-74 for the exact same basket, and cast as a poverty line number.

This approach was flawed; economic development had vastly changed consumption baskets since 1973-74, for one. Secondly, as you move away from a base year, the inflation statistics get weaker and weaker, and given our data for inflation are very suspect, we understated rural poverty. Finally, some assumptions didn’t pan out — the good people at the Planning Commission assumed that healthcare and education would be paid for by the state, and a household only needed to take care of the rest. So that portion of the consumption basket was never inflated in price. In reality, today, both cost serious money.

The Tendulkar committee decided to take a different approach. They started with the assumption that the only data of the old calculation that was "socially broadly acceptable" was that 25.7% of the urban population was poor. Using this, they constructed a price index, using per-household consumption data that was in the NSS Surveys and used the 25.7% number to create state-specific Urban and Rural consumption baskets for the poor. Additionally, they used annual data for items that weren’t changed often (like footwear or clothes) but monthly data for items like food.

There was a lot of other work involved to adjust prices between states, and adjust relative prices to an all-India index.

The result was a set of poverty line numbers for each state, and an aggregate number for the country. This has been corroborated through other sources, such as cross verifying the calorie intake in the new method (around 1800) and matching it with the new suggestions for minimum calorie intake, according to the Food and Agriculture Organization, Rome. 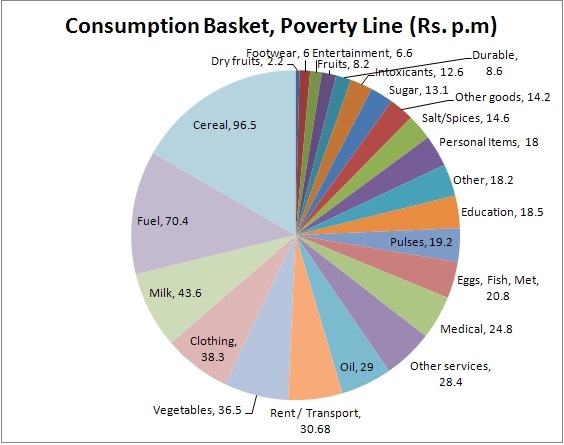 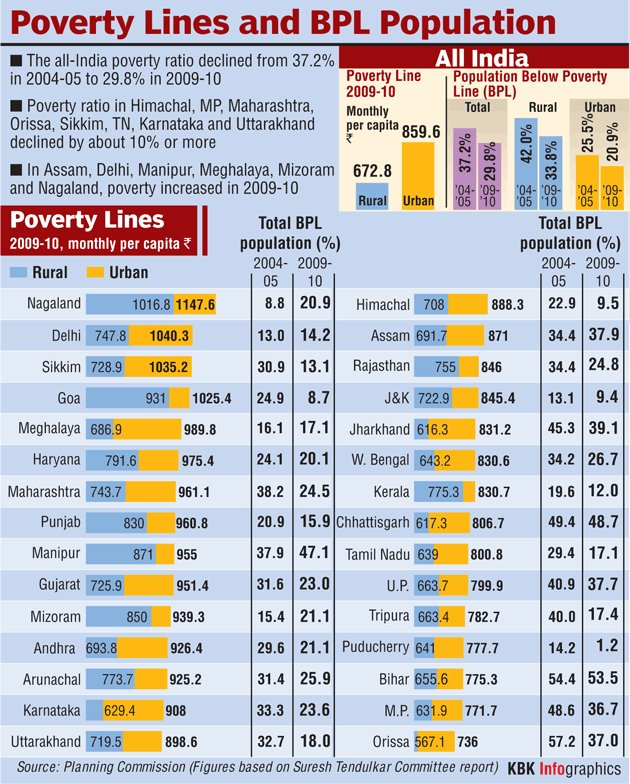 States such as Andhra Pradesh, Tamil Nadu, Maharashtra and Gujarat have done well (for their size); they have all come from the 30% poverty rates or higher to the 21%-24% levels, lesser than the India average. But Bihar at 53.5% and Chattisgarh at 48.7% are way above national level numbers and haven’t improved much since the 2004-05 survey. Other ways to slice and dice the data — by religion, case, education level or occupation, click here.

Overall, while this method seems to be far more consistent, it is unlikely to fit the definition of poor in the minds of any reader. While that is the nature of such data, there seems to be no real alternative that works better.

Yet, at a grand level, the Rs. 28 per capita that we would call the poor today translates to around Rs. 4,000 per month. That is a number that suits many urban households that are necessarily poor. Yet, if the definition of poverty were to include access to power, clean water, formal credit from banks or communication networks, then we will find that a lot more of India is very poor indeed.