A marginal rise in the WPI, it turns out, corresponds to a steeper rise in the Consumer Price Index, with the CPI inflation showing 8.83% (WPI inflation was a mere 6.95%) I plot a WPI chart with figures of the CPI from August. 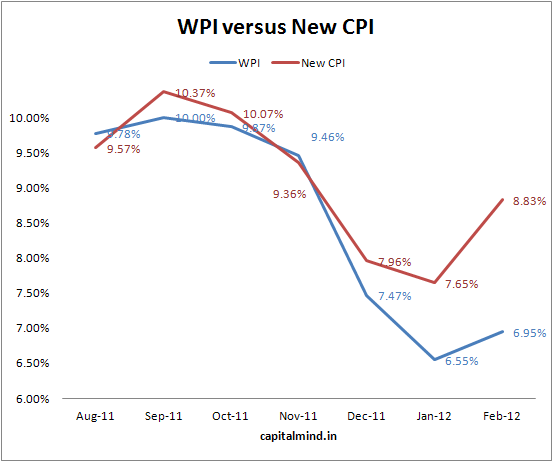 Note: The CPI data only started in Jan 2011. The data from August to December 2011 is an “annualized” number based on the inflation since Jan 2011 to then. From Jan 2012, it’s year-on-year. Also, due to MOSPI’s whims and fancies these numbers can change.

The slope of the CPI move is significant, and much of it has to do with the spike in food inflation (which is 49% Of the CPI) 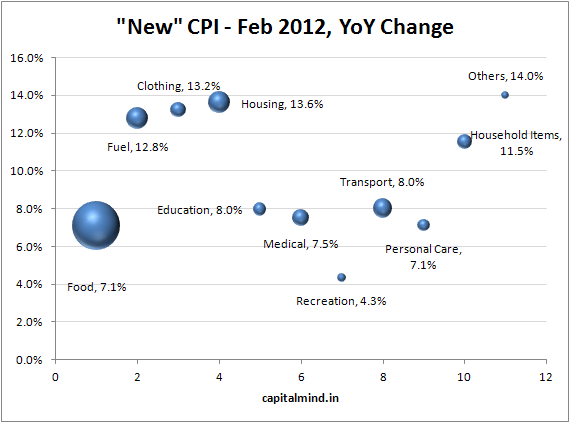 The size of each bubble is the weight in the index.

You might think that Food is a temporary thing. Well, core inflation (that is, CPI minus food and fuel) is going at 10.22%. The fear of inflation isn’t gone yet; with an increase in service taxes and excise duty, plus the potential change in diesel prices, things aren’t going to go down in a hurry.