The per-capita income growth in each state from 2004-05 to 2009-10 (data from RBI) brings out an interesting chart. You would have expected Gujarat to top the chart, but no – Gujarat’s economic growth isn’t as good when it comes to the real data than the image they show. 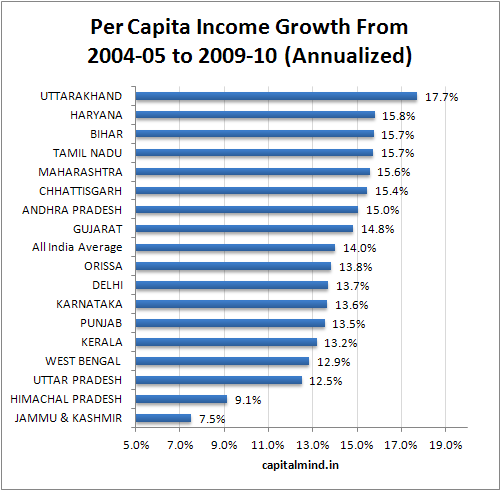 The comparison with neighbour Maharashtra:

I have been looking at Gujarat’s comparative growth in general, from an economic data perspective and other than in power, Andhra Pradesh and Tamil Nadu have done better in many areas (GDP, State Revenues, per capita consumption etc.) Bihar now runs a huge surplus on the revenue account, and while it’s had a low base, the growth has been stellar.

I realize this will attract a lot of pro-Gujarat comments, but please be decent, and note that I’m just plotting the data out there. Even I’ve heard from enough people that Gujarat is doing a great job, which is what I heard/saw in AP in the early part of the last decade, and which I saw in TN with the roads in 06-07. I think Gujarat does a great PR job, but the data isn’t quite following up just yet.