I’ve written about the upcoming FCCB problem, where a number of FCCB redemptions were coming around about now, and they were all so far under par that they would need to be redeemed, not converted to shares.

Fitch has now released a report that classifies outstanding FCCBs in 2012 by stress levels and I shamelessly scraped it from Deepak Singh’s excellent State Of The Market blog. In 2012, more than $7 billion worth FCCBs come due, and according to Fitch, $1.5 billion worth FCCBs have serious potential for default. 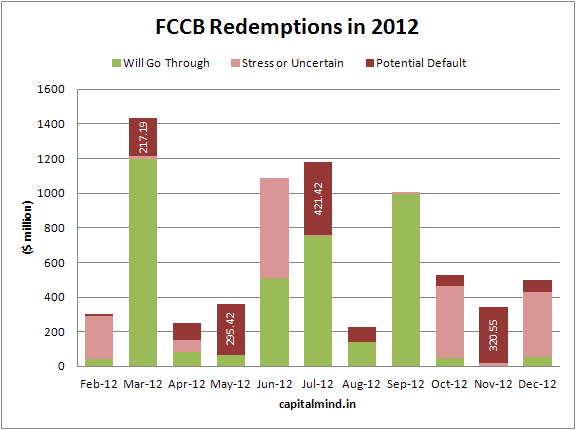 In March, of the 217 million that comes due, 138MM was from Subex, which is trying to defer the FCCB over to July 9 (the decision will happen in a bondholder meeting today). But it is still stressed, since the idea of the deferment is to restructure the borrowing.