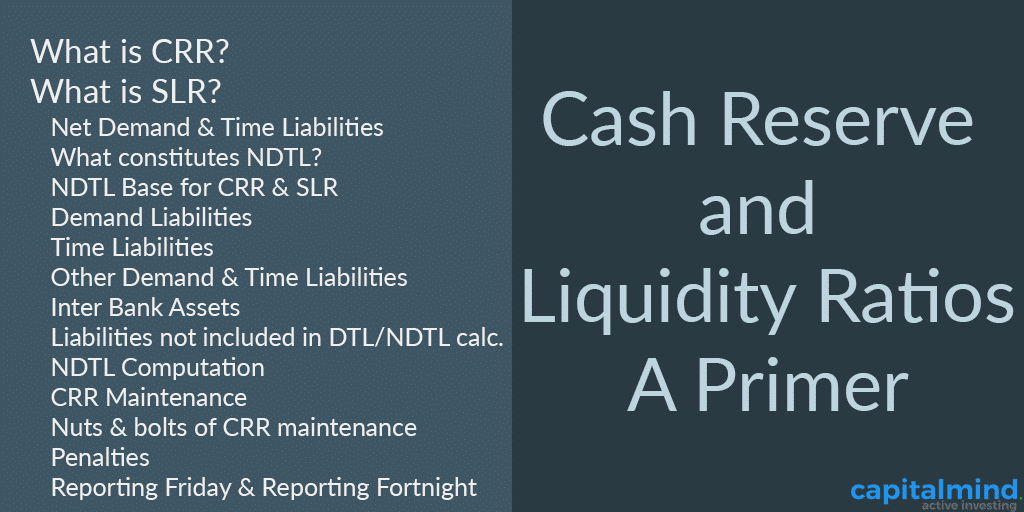 This is a guest post by Dheeraj Singh. Dheeraj is a former fund manager for many years specializing in fixed income. Used to head fixed income at IL&FS Mutual Fund (before it got taken over by UTI) and subsequently worked with Sundaram BNP Paribas Mutual Fund (now Sundaram Mutual Fund) heading the fixed income desk. He runs Finanzlab Advisors, a treasury and risk management consultancy.

Introduction: The Reserve Ratios – A Primer

Cash Reserve Ration(CRR) and Statutory Liquidity Ratio (SLR) are two important reserve ratios applicable to banks. These are also tools that the Reserve Bank of India uses in the conduct of its monetary policy.
The purpose of this primer is to provide a working knowledge and understanding of these reserve ratios. The content of this primer is based on RBI’s Master Circular on the subject and my own practical knowledge gained through the many years that I have been involved with the money and debt markets as a fund manager. Errors and Omissions if any are entirely mine. If you do spot any errors, please let me know in the comments.

CRR is that proportion of a bank’s Net Demand and Time Liabilities (NDTL) that it has to keep as cash deposits with RBI. Cash deposits do not mean physical cash, but a credit balance in a current account that every bank maintains at RBI.
This proportion is specified by RBI and could change from time to time. Currently (on the date this piece is being published), CRR is 4.75%.
CRR is governed by the provisions of Section 42 of the Reserve Bank of India Act, 1934.
There is no minimum level of CRR. We could go upto zero CRR (negative values are of course absurd). Similarly, there is no maximum. In theory, CRR can go upto 100%, which would mean RBI impounding the entire NDTL as a cash reserve.
Until the RBI Act was amended in 2007, the minimum value of CRR was statutorily fixed at 3% and the maximum was fixed at 20%. Both these limits (lower and upper) were removed by the amendment which came into effect in early 2007.

SLR is that proportion of a bank’s Net Demand and Time Liabilities (NDTL) that it has to maintain as investments in certain specified assets. SLR is governed by the provisions of Section 24 of the Banking Regulation Act.
There is no minimum stipulation on SLR (earlier there used to be a minimum stipulated SLR of 25% – but this was removed with an amendment to the Banking Regulation Act in 2007).
However, SLR can not exceed 40%.

It is quite apparent that to arrive at CRR or SLR we need to first calculate NDTL.

As the name suggest there are three broad components to NDTL.

Additionally Demand and Time Liabilities (DTL) are further broken up into

RBI has been empowered to decide on what kind of liabilities fall under DTL. In case of doubt, banks are advised to get a clarification from RBI.

All the Financial Advice You’ll Ever Need

A quick Primer: Shares, IPOs and the Stock Markets

NDTL Base for CRR and SLR

Is CRR and SLR maintained on the same base – viz NDTL?
The short answer is, No.
While the NDTL calculation is broadly the same, there are some important differences when it comes to it’s use to compute CRR and SLR.
Some items are exempt for CRR purposes and so, the base on which CRR is to be maintained is not the same as the base on which SLR is computed. We shall look at these differences in the base a little later.

Demand Liabilities of a bank are liabilities which are payable on demand. These include

Time Liabilities of a bank are those liabilities that are payable other than on demand.
These include

Other demand and time liabilities (ODTL)

Any amounts due to the banking system which are not in the nature of deposits or borrowing are also to be included in other demand and time liabilities. Such liabilities may arise due to items like (i) collection of bills on behalf of other banks, (ii) interest due to other banks and so on

Assets with the banking system include

Any other amounts due from banking system which cannot be classified under any of the above items are also to be taken as assets with the banking system.

Liabilities not to be included in DTL / NDTL calculation

Computation of NDTL is a multi step process as follows :

Take the sum of the above to arrive at “DTL to Others” – (B)
Compute Other Demand and Time Liabilities – (C)
Calculate Assets to the banking system – (D)
Compute Net Inter Bank DTL by subtracting Assets to the Banking System from DTL to the banking system – (A-D)
If the Net Inter Bank DTL so calculated is negative or zero, it is ignored.
Thus NDTL is given by
NDTL = (A-D)+(B+C) if A-D is greater than zero,
NDTL = B+C if A-D is less than or equal to zero.

FIIs Got Hit by Minimum Alternate Tax of Rs. 40,000 cr.; All Because of Capital Gains Taxes!

How did the Budget 2015 Change Taxation in India?

How the “Ex” Date and Record Date for Dividends, Splits and Demergers Works in India

Items on which CRR maintenance is exempt:
Banks are exempted from maintaining CRR on the following liabilities:

The nitty gritty of CRR maintenance

Effectively the bank has maintained a product of

(To calculate the product we multiply the amount maintained by the number of days the amount is maintained as balance. Since we are taking daily amounts we simply multiply the amounts by a factor of 1)
This means that the bank now needs to maintain only 70-37 = 33 crores as product in the second week of the reporting fortnight.
The minimum 70% stipulation means that banks can maintain neither too low a cash balance nor too high a cash balance on every day of the fortnight. If they maintain too high a cash balance during the initial days of the fortnight, it may so happen that the product build up is rapid and the bank may need to maintain a significantly lower cash balance during the last few days of the fortnight. This condition could lead to a breach of the minimum 70% rule which could incur penalties.
Banks thus have to be diligent in the calculation and maintenance of their fortnightly product.
Until this 70% rule was brought in sometime in 2002, banks were free to maintain any amounts, with the result that volatility in the money market was high, as banks’ requirement of funds varied sharply depending on their product build up during the reporting fortnight.

Bank Rate + 3% per annum on the amount by which the cash balance actually maintained falls short of the prescribed minimum on that day.
If the shortfall continues on the next succeeding day/s, the penal interest levied is at the rate Bank Rate + 5% per annum.

on the amount by which the balance falls short of the requirement.
If during the next succeeding fortnight the daily average balance is still below the required amount, the penal interest liable to be charged is

As has been discussed above, SLR is that proportion of NDTL that the bank has to maintain in certain specified assets.
It should be noted that for SLR purposes NDTL is calculated slightly differently.
Firstly, all inter bank liabilities and assets are to be included for SLR purposes (unlike CRR wherein liabilities with original maturity between 15 days and one year were excluded)
Secondly, there are no exemptions (items on which no SLR is to be maintained) – unlike CRR where some items are exempt.

The specified investments that are eligible for SLR purposes are

Of the above, any securities which are encumbered in any way can not be included for SLR purposes. This also includes situations wherein the security may have been submitted to RBI as collateral under the daily liquidity adjustment facility (the commonly understood RBI repo window).
Unlike CRR which is maintained as an average over the entire fortnight, SLR has to be maintained on all the days of the relevant fortnight.
The relevant fortnight and NDTL are however the same as in the case of CRR.
SLR is therefore maintained on the NDTL as on the reporting Friday of two fortnights ago.(just like in the case of CRR).

In my opinion, the bank rate continues to exist only because of the penalty provisions on default in maintenance of reserve requirements.
Had these penalty provisions not been linked to the bank rate under the law, we would have possibly seen the demise of the bank rate as an instrument of monetary policy.
Under the current situation doing away with the bank rate would require amending the RBI Act and the Banking Regulation Act – something that only the Parliament can do. Amending laws take significant effort, and therefore we might have to live with the bank rate for some more time.
RBI has anyway made the bank rate irrelevant by equating it to the rate at which it lends money under the marginal standing facility (MSF). MSF is currently pegged at one percent above RBI’s repo rate.
Update: It seems I may have been a bit enthusiastic in predicting the demise of the bank rate. Sec 372A of the Companies Act says that companies can not lend to each other at an interest rate lower than the bank rate. So RBI’s increase in bank rate ensures that inter corporate loans or investment in bonds can only be made if the coupon rate is at least the bank rate. Of course there are ways around this provision – if one is structuring a deal. However, this just goes to show, how laws enacted ages ago, need to change with the times. I’m sure RBI probably did not intend to regulate the rate of interest paid out in the inter corporate loans market (or maybe they actually did), when they changed the bank rate recently and linked it to the marginal standing facility rate.