I write at Yahoo on the Banking Ombudsman:

Have you been hassled by credit card bills even after you have had a "full and final settlement"? Did a bank give you a bill for a credit card you don’t even have, and then deducted the amount due from your bank account before asking you? Have they changed your interest rate without informing you in advance, or giving you an opportunity to refinance elsewhere?

You can complain, without having to go to court. You must, of course, complain to the bank first, and only if the bank is unable to resolve your issue within 30 days — or take a decision that you think violates banking rules — you can go to a higher authority, the Banking Ombudsman.

The Banking Ombudsman (BO) web site allows you to directly lodge a complaint online. (Sadly only 13% were given online, and 14% by email last year — 73% of applications still came by the old method of letter or post-card) You will need to go through the documentation to find out exactly what section your complaint applies in, but the process is well detailed. If the BO decision is not to your liking, you can further appeal to an Appelate Authority.

Some of the "exemplary" cases (read the annual report) give you an idea of how a hopeless situation can be rescued by a process that doesn’t involve the legal drudgery that the regular courts have become. In one case, the bank lost all original documents of a house, given as collateral for a housing loan. The bank then decided to give "certified copies" of the documents instead. The BO ruled that original deeds were not replaced by certified copies, and the bank was ordered to pay Rs. 25,000 for a deficiency in service, and also to advertise in newspapers that they had lost the originals. (Such ads are usable as evidence, in case there is ever a litigation involving the property, of the chain of ownership)

In another case, a customer who applied for a loan later decided against taking it; the bank issued the loan anyway, to a person with a similar name. When that person defaulted, the bank used the police to harass the original applicant, who hadn’t even taken the money! The ombudsman provided a compensation of Rs. 100,000 — a stiff amount, but easily justifiable considering the damage caused and the ridiculous nature of the case.

Many cases have been about credit cards; a customer was given statements for a card that was never delivered, another whose CIBIL data was not updated for two years despite having settled the bank claim, and yet another who was harassed without having a card from a bank with the excuse that his name was similar to another defaulter.

One common complaint now is that interest rates on loans are no longer "fixed". Even fixed rate loans carry a reset clause every few years (which means it is totally silly to go for a fixed rate loan). A customer who complained of one such reset was told that the reset clause was perfectly valid — this serves as a basis for further such cases.

The BO seems to have worked with insurance players as well. In one case where a customer was "mis-sold" an insurance policy as a one-time premium rather than a regular premium, the BO convinced the insurance company to refund the premium of Rs. 1 lakh . (You must note, however, that it was the customer’s education level and monthly earning that justified the action — it’s unlikely that the BO will take action if you are smart enough to have read through these documents. In essence, you don’t have an excuse if you’re well educated)

But these really seem exemplary. Of the 72,021 complaints received, about 50,000 — or 70% – were rejected. More than 51% of complaints were rejected on grounds of them being "non maintainable", that is, they were either incomplete or didn’t come under the Ombudsman act. Even of those that were maintainable, 13,952 were rejected. What we can learn from this is that it’s important to keep copies of all communication and get things in writing, so that if there’s an issue later our complaint doesn’t get rejected for inadequate or incomplete documentation.

You might think that private banks are better because of service, you might be surprised that the number of complaints per million accounts, for private banks is far higher — by a factor of 3 — than the good old public sector ("nationalized") banks. 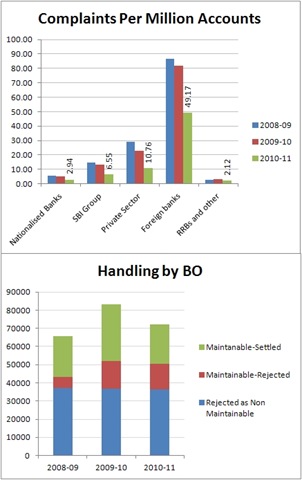 While the ombudsman has done a good job, the current reach is too little (only 15 locations where the ombudsman is present) and it is highly unlikely that bank customers are aware of the process of appeal against deficiencies in service. Banks are a highly regulated entity and must adhere to strict process. For instance, they cannot just recall a loan from you because they want to; they cannot refuse to give you money that is yours; and they pay a huge fine (Rs. 100 per day) if your account is debited after an ATM transaction but the machine doesn’t give you money.

These rules aren’t known by too many people, and we can’t expect bank officials to tell customers where they can complain (since the bank employee is possibly at fault anyhow). As more people become aware, the volume of complaints — "maintainable" or otherwise — will go up, and both the Ombudsman and the individual banks will need to up the level of service.