The surprise is largely in manufactured goods, which should have gone up, according to me. I’m speaking from a consumer price perpective, of course.

Inflation data is also revised after two months, and the October data, which was first revealed at 9.11%, has now been revised upward to 9.46%. The current move “might” be a base effect from last year, since the uptrend line of the index seems to be continuing even with the Jan data. 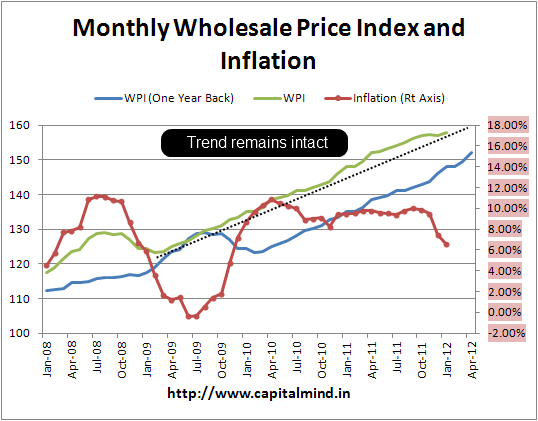 Headline inflation for Feb, at this rate, might show a marginal increase as the index was flat last Feb – this data is revealed mid-March.

However, the dollar improving back to below Rs. 50 will allow policy makers a sigh of relief, even if it was driven by the RBI selling dollars. The higher exchange rate – still a good 10% higher than Feb last year – makes our imports costlier and would have (should have?) impacted prices already.

All said, the “prediction” that inflation will come down to the 6% levels by March – by the RBI – seems to be coming true. Gotta give credit where it’s due because they have been so wrong on the prediction front in the past!