At Yahoo, I write on The Dangerous Fiscal Deficit Situation in India:

While we are battered with news about abandoned babies, victories and then losses for telecom firms, elections in UP and surging stock markets, it’s useful to note the quietly released data on the fiscal deficit that are seriously alarming.

The Comptroller General of Accounts (CGA) has reported that the government revenue, from April to December 2011, is 15% lower than the same period last year. Meanwhile, total expenditure is up 14%. Higher spending and lower revenue point to a fiscal deficit that is more than double last year’s figures, till December. 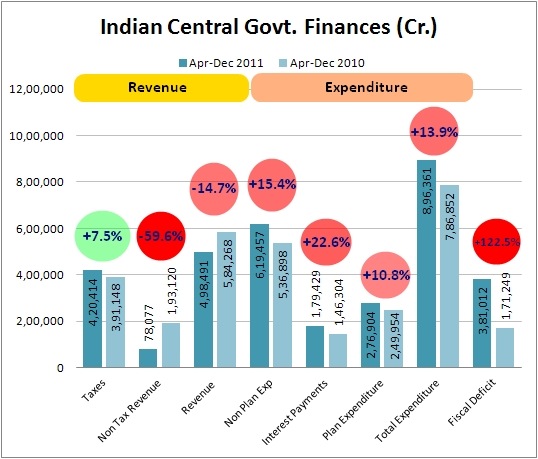 Advance Taxes Are Not Enough

December, was when corporates (and individuals) pay another chunk of advance tax. This should have bolstered government revenues, but it seemingly has not. Total tax revenue in December, net of what was paid to the states, was Rs 99,944 crores, just 5.3% above the previous year. For the April to December time period, tax collections are just 7.5% higher.

Consider that India’s Gross Domestic Product has grown 16% in “nominal” terms — that is, before inflation is removed. Government tax revenue should grow at the nominal rate (at least), but increasing inflation has eaten substantially into profits and thus, to taxes.

Meanwhile, government expenditure is growing at nearly 14%. No wonder the deficit is now at Rs 3.8 lakh crore, which is already more than 90% of the budgeted deficit for the entire year.

Analyzing the December quarter results which are being announced now tells us that corporate profits, from the 400 top companies, have fallen 1.5% from the same quarter a year back. The September quarter was also a declining number. While revenues have grown 26%, expenses have grown even more at 32%. A lower corporate profit number doesn’t just cut directly from government revenues, it makes valuations of their stocks lower (and the government owns a large chunk of PSUs).

The Lack of Enough Non-Tax Revenue

Last year, a bulk of non-tax revenue came from selling the 3G and BWA spectrum. This year the government expected to sell equity stakes in public sector companies like ONGC and BHEL, which has not yet happened largely because the government believes the market prices are too low.

The government has tried innovative means of revenue. It has asked government owned companies to buy back their shares with their surplus cash. Nearly 30,000 cr. worth shares of large companies like L&T and Axis bank lie with SUUTI, a special purpose vehicle that was created when US-64, a mutual fund, was bailed out by the government. These could be sold, but prices will drop if the news is public, so the idea is to sell the shares into another SPV and use accounting magic to make the non-tax number. The most innovative, perhaps, was to attempt to charge Vodafone with an income tax order of more than 8,000 cr. after they bought the telecom company, Hutch; the Supreme Court has since ruled against the government.

While expenses are up 14%, they don’t include certain large ticket items. The oil deficit — the under-recovery because we price diesel, LPG and kerosene below market prices — is now 97,000 crores, and is likely to grow to about 125,000 crores. A good portion of that will have to be financed by the central government. There is an increase in the acquisition prices of food from farmers, there’s more fertilizer subsidy, increase in payments to NREGA, and so on. For the last quarter, there are also bailouts of Air India, additional capital to the public sector banks and the whole election process to keep expenses higher.

Why are deficits bad? After all, what the government can’t earn, it will borrow from the markets. What it can’t even borrow, the RBI will print. The RBI is using Open Market Operations to buy bonds on the same day the government is issuing new ones — effectively printing money to fund the deficit. This is also what is happening in the US with the Federal Reserve buying bonds, in the UK and Europe, and in Japan. Then why is a deficit a problem?

The often stated problem is that money-printing at this level will stoke inflation. Effectively, to fund a deficit of 600,000 crores, the RBI might need to print 200,000 crores. That is an increase of nearly 15% in our money supply, and if you add another 10-12% from other ways, we’ll be expanding money supply by one-fourth every year, a sure shot recipe for higher prices as the money chases the same goods.

Those other countries would love some inflation — but we’re dealing with a lot of it, with inflation in double digits as recently as October. Germany and Zimbabwe have seen events of hyperinflation, when inflation was more than 100% a day. That was largely because of the unlimited printing of currency, and the inflationary spiral acts very fast if you cross a boundary. The RBI’s actions may “bailout” the government borrowing programme today, but given that they have a strong stance against inflation, RBI is equally likely to increase rates or take up other measures if inflation goes back into double digits.

Increased borrowing also crowds out private credit — if the financiers can lend to the government at a good enough rate, they won’t lend to you and me. And eventually, we are a private led economy (the government is less than 25% of our GDP) so the lack of private growth will hurt everyone.

High deficits are unsustainable, as Greece and Portugal are finding out. Regardless of how things might seem, and other news that seem to be grabbing headlines, now is the time for tough decisions. We may need to increase taxes, reduce expenses or find alternate sources of government revenue. We may need to forego some of the populist measures our government pushed down our collective throats. But will this happen or will we run to the new deity in town, the printing press?