At Yahoo, I write on the Irrelevance Of The Sensex:

In a recent trader meet, a speaker asked on stage where the market closed last. Answers were “4714” and other figures around the 4700 number, but the speaker was looking for another answer. It dawned on us soon that he was looking for the Sensex, which none of us knew even to the closest one thousand. It was around 15,700, said the speaker, dismayed at the total lack of awareness because his slide said “Sensex: The Index The World Tracks”.

To a certain extent, that remains true. People do talk about the Sensex. “I’ll be a buyer below 16,000”, you hear. Newspapers and TV channels cheer the appearance of “20,000”, a number only associated with the Sensex.

But the irrelevance is mostly to the trading community. Volumes have deserted the Bombay Stock Exchange, for the “better” deal at the National Stock Exchange (NSE). Looking at the “cash” turnover, the gap between the two exchanges has widened from 2000 onwards. 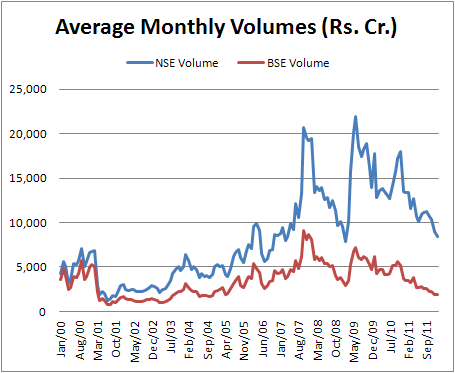 What has changed since 2000? For one, the derivatives market has flourished on the NSE, with volumes far exceeding the cash markets. NSE started futures on the Nifty in 2000, following up with stock futures and options later. BSE, while having started at the same time with derivatives that replaced the “badla” system, has only recently promoted them. Given that the cash and futures markets are closely related — traders can arbitrage the two markets — it is no wonder that NSE still has four times the volumes of the BSE in cash. Higher volumes means you can buy at a lower “impact” cost due to the presence of more sellers; even those that track the Sensex will buy on the NSE.

But the BSE existed a long time before the NSE. The term Sensex was coined in 1986, but the BSE has existed for over 135 years. There are more stocks listed on the BSE than on the NSE, which was established in 1994. Yet, the BSE lost the battle!

To an extent there were regulatory restrictions — NSE could easily provide terminals nationwide, while BSE only allowed to a slew of sub-brokers, which added to delays and costs.

But the BSE wasn’t competitive. Broker cartels were common. Trades were only settled every fortnight, with small defaults and payment crises common. In 1995, the exchange was closed for three days after a default of Rs. 18 crore on a single scrip. The early days involved little technology; brokers would send their agents to the trading pit, when they signalled trades to each other using hand signals and shouting — the “open outcry” model. As an investor, you told your broker to buy a share, and miraculously, you would be given the highest price of the day, and there was really no way for you to verify.

The NSE started with “screen” trading, where all trades would happen in an automated method that matched the best buyer with the best seller, and they offered verifiability where you could check trades and prices. There was a clearing corporation to limit default risk, and NSDL set up to do dematerialized settlement instead of paper. Also, the NSE wasn’t managed by brokers; it was owned by institutions and managed professionally, which led to less conflict of interest. From here on, the NSE gained favour even though BSE followed through with similar technology and practices.

The issue is trust: the BSE appears to favour its own. In 2006, a dealing arm of a broker sold eleven lakh shares of Tulip IT Services at a price of Rs. 0.25, on the day of its first listing, with the price having settled at Rs. 185 towards the end of the day. He claimed a typing mistake, costing over Rs. 12 crore — now if this were you or me, we would be asked to suck it up. But the BSE did something dramatic: It decided that all orders executed at less than Rs. 96 would be deemed to have executed at Rs. 171, the average price of the day. What then of the person who thought he got a deal at 0.25 and sold at Rs. 100? He now gets a loss of Rs. 71 instead. This is blatantly unfair — and a loss of Rs. 12 crore is not huge; the seller should have borne it, or the exchange should have covered for it, but it can’t be foisted on other traders who participated and assumed that the price they were seeing was correct. (Indeed, an instance of “manipulation” where someone placed a rogue order for Tulip at Rs. 1 per share has been penalized by SEBI)

An ex-BSE-president Anand Rathi had asked for data about who was trading what — information that would benefit him as a broker, and which eventually caused him to resign. Since then, brokers have been removed from senior positions in the exchange, and the management team is now professional staff including a suave CEO. Technology has been upgraded, and there is now complete electronic order matching and verification.

But this hasn’t stemmed the rot. Recently, a glitch in algorithmic trading caused the futures market to crash during “mahurat” trading, a special short session held on Diwali for traditional reasons. The decision, once the glitch was found, was to annul all trades in derivatives on that day. What then, if you took on a counter-trade in the cash segment or in the NSE derivatives market? You’re left with an open position for no fault of yours.

And the point isn’t that there was a genuine issue; the point is that in a fair market, you would assume that:

a) The “rogue” trader should have been penalized to the highest extent possible.
b) There would be much more transparency about what went wrong, how they plan to avoid it in future, and going forward, what the process for “annulment of trades” is.

We have none of this, and if you asked a market participant today, he wouldn’t expect it either, because it’s the BSE.

Sure, we know the BSE and the Sensex because of the past, but if things are to change, they need to attract investor and trader volumes. For that, there needs to be faith that the exchange will treat investors fairly and not resort to knee jerk reactions like cancelling all trades. Sadly, every incident that undermines trust will result in the Sensex being only an over glorified number, the real money will continue to be in the Nifty.