The week ended Jan 20th has seen the market up more than 9% for the month, in a recovery that is as stunning as it was unexpected. With 2011 going down more than 24%, January has pleasantly surprised on the upside. In a tweetup with market commentators in Bangalore, I suggested that the lows weren’t yet in because of the lack of panic – and one of the members responded that the panic season is over, and this was the lull before a big upmove. 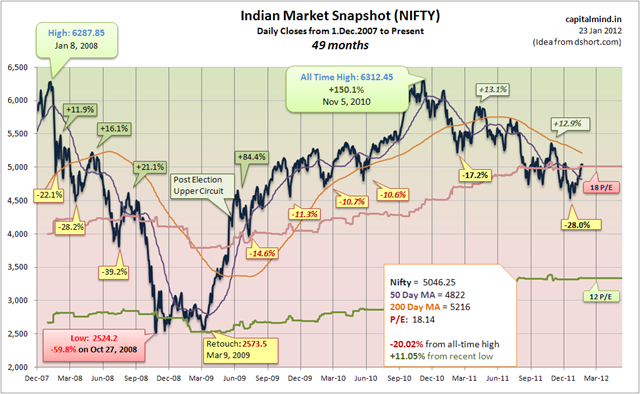 Now bear market rallies of 10% and20% are hardly unknown. In the last year alone, we have had two such rallies. Is this currently that kind of a rally? Will it fizzle out right now, or stick around?

The answer can be in the fundamentals or the technicals. So look at the

To put it mildly, we’re not in great shape. Seventy two companies have revealed results (till Saturday) and the situation is like this: 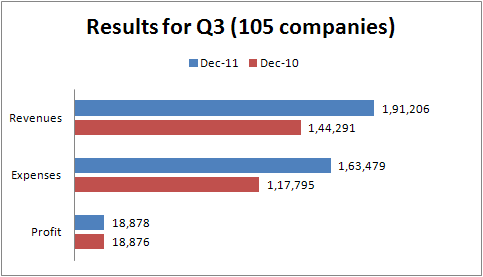 While revenues are up 33%, the increase in expenses have matched that, and profits are up just 0.01%. This, despite a stellar performance by banks, which seem to not be recording any of the high NPAs that are usually associated with a slowdown in the growth of the economy as witnessed recently.

The problem started in September. Q2 profits, after all companies had revealed results, showed a dip of over 30% in net profit. (This is after ignoring the one time huge profit made in September 2010 by Piramal Healthcare when it sold a division to Abbott, an entry that would have made the dip seem much worse).

This is now exacerbated by macro factors.

1) The Fiscal Deficit is wider by over 1% now, as tax collections have just not met targets. Essentially we haven’t been able to make that 100,000 cr. that was made the year earlier in the 3G/BWA auctions. This means that the government will try to cut spending to keep the deficit down and to reduce further borrowing.

2) Liquidity in the Banking system is very tight. Over 150,000 cr. is borrowed overnight in the repo window nowadays. While this slackening is good to bring down demand and inflation, it does have a negative impact on growth in the medium term.

3) Europe continues to be in a mess. The situation in Greece gets worse every week, as they negotiate with borrowers to take a huge haircut on their bonds – some say as much as 68% – and roll over existing debt to something that will be paid out over the next few years instead. This has the additional requirement of needing to be “voluntary” in nature, which will not trigger credit default swaps (a trigger means the banks – the sellers of the CDS – will have to pay; and they simply can’t afford it). The failure of these talks – or subsequent ones – can lead to Greece leaving the Euro, with not only disastrous consequences of itself, but with scars on banks across the world. Worse, the world will shift to Portugal and Ireland, which will demand a sweet deal (if further attepts to save Greece are taken) or threaten to leave the Euro together. We would be naïve to think that India is not affected –it will be.

4) There is no government action. With public policy going down the route of populism in the face of big election months, and the government unwilling to sit down and make tough decisions, the uncertainty that has given investors jitters persists. Unless there is a strong leadership change, I doubt the feeling of “what are we doing?” will go away.

2) The rupee has recovered. To nearly Rs. 50 from Rs. 54 to a dollar, and much of it is through the RBI action of selling dollars. Also it seems foreign investors have put in over 6,000 crore into equities in January.

3) Growth isn’t stunted. The Purchasing Manager’s Index (PMI) and the Index of Industrial Production (IIP) have both shown strong growth figures, even if I don’t trust the IIP that much.

4) The economy is still strong. While we focus on numbers like 8% or 7%, the nominal growth of the economy is over 15%; our GDP has doubled since 2006. The momentum that this kind of growth creates will ensure we don’t stop suddenly; just inertia will have us grow enough to be the envy of western economies. However, if we do slow down, then starting the process again will take many years (again, inertia comes against you).

5) Finally, valuations are low. With the markets reaching lows of 4500 on the Nifty, the valuations at 16 to 18 P/E are much better than the 20+ P/E ratios we have lived with in the last five years. Even then, one has to be worried: EPS growth has come down to 10%. 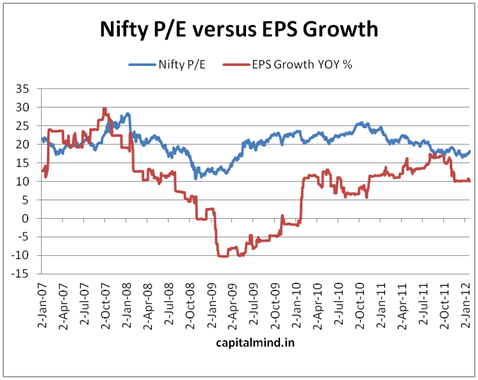 Now on to the technicals. Prices tell you a lot, and it looks like the resistance on the upside is at the 5100 level. The 200 DMA is still higher though in this move the Nifty has moved above everything else. The MACD – discussed earlier in the Chronicles – still shows that we have some more to go before we either consolidate or reverse. 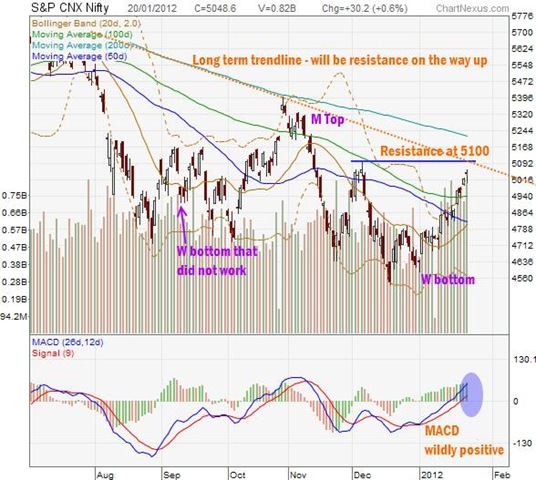 Long time readers will also notice the W bottoms and M-Tops. The recent was a nice little W-bottom with a higher low, but if you had followed B-Bands the strategy of w-bottoms has not always led to a rally. In fact there have been many instances of one getting stopped out recently. (which is why it’s so important to stick with a system – one big win is greater than a few small losses!)

The other thing we’ve spoken about – the number of stocks above moving averages – is a very useful sentiment indicator. The indicator needs to dip downwards before a reversal in the index, and it’s currently at a very high level (though has not yet turned). The distance from the 20 DMA has also reached new highs, as the bounce has been vicious and fast. On the bearish side, we have a McClellan oscillator that’s at one extreme. This signals a reversal but is not usually the only indicator (you have to confirm this with other indicators). 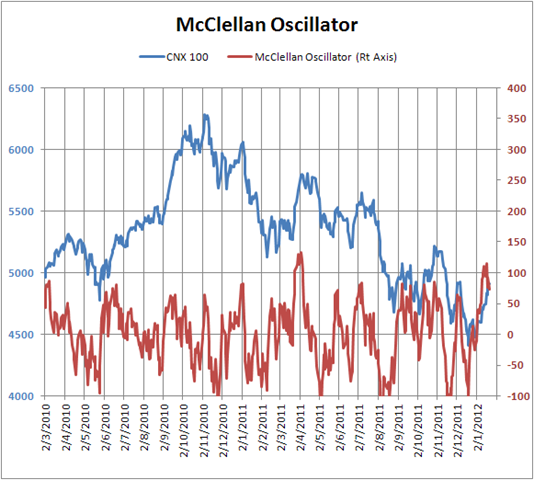 So technically speaking we may have a little more to go here, before we can say if sentiment is changing. Remember that technical analysis is not about prediction, it’s about working the probabilities and the expected returns on each alternative.

Where am I? I’ve been out of the trade for longer than I’ve wanted, but it looks to me like the real money is in the short side. That is, we have reached a level where it is unlikely to go up a lot, but is likely to go down a lot. The only thing that prevents me from taking a large position is that too many people are expecting the market to fall.

I mean that. When a substantial majority is on one side of the trade, the markets usually go the other way. It was apparent – in hindsight perhaps, but I had tweeted about this in mid-December – how everyone was bearish (including me!). The expectations were only between a) will we fall a lot? Or b) will we fall a little. That, and the warning sign in the tweetup meet in Bangalore – where I was told that sentiment is rock bottom – should have forewarned me. It still seems that way – that most stock market participants continue to be bearish, including me. But this may be the beginning of a huge rally, with a few stops in between.

But slowly, things will align together if that is so – imagine that Europe resolves itself at least for the next two years, there is a recovery in China, our interest rates go down, inflation soothes itself, the government decides to go with some good reforms…all this, together, is unthinkable today, but it could be small, tiny moves that eventually lead the way. My point: I doubt it, but if these signs come along, I’m not going to fight them.