Reliance Industries has said it will consider a share buyback in its Friday board meeting, and the stock went up 5% to 780. The theory is that Reliance will use its huge cash reserves – over 85,000 crore – to buy back about 10,000 to 12,000 cr. worth of stock. They will do this using a “market buyback”, where an investment banker will buy Reliance shares using Reliance’s money.

(For more information on what market buybacks are, read my article: Buying Back Our Deficit)

Moneylife finds that they have done a buyback announcement earlier, that didn’t quite meet their stated goals:

The buyback program, seven years ago, was kept at Rs2,999 crore, which was about 10% of the share capital and free reserves of Reliance as on 31 March 2004.

However, throughout the period, Reliance bought back its shares only on nine days. And, the total buyback done by the company was a measly Rs149.62 crore. So, the actual buyback program was just 5% of the total buyback size of Rs2,999 crore.

This is not just Reliance, but in most market buyback announcements I have tracked in the last five years, companies have bought substantially lower quantities than they supposedly intended to. The idea of a share buyback was usually to keep the stock price up, but a few days after the announcement the shares would go back down. (Also see: Rajat Rajgarhia of Motilal Oswal thinks the aim is to “shore up sentiment in the stock”)

Another reason I’ve seen quoted for this announcement is that Reliance lost its position as the top weighted stock on the Index, and that Mukesh bhai is big on ranks. Not that this is substantiated, but it’s such an awesome gossip conspiracy story that I had to mention it!

It’s not usual, though, that a company of Reliance’s size – one of the largest in India – makes such “preliminary” announcements, but the company has been very careful to ensure that the stock doesn’t crater around bad results seasons. They have announced gas finds, deals, and agreements, nicely timed around results announcements, which is all above board (and it’s not just them, the big IT company we all know about has done it as well).

The stock, in the last couple years, has not done very well: 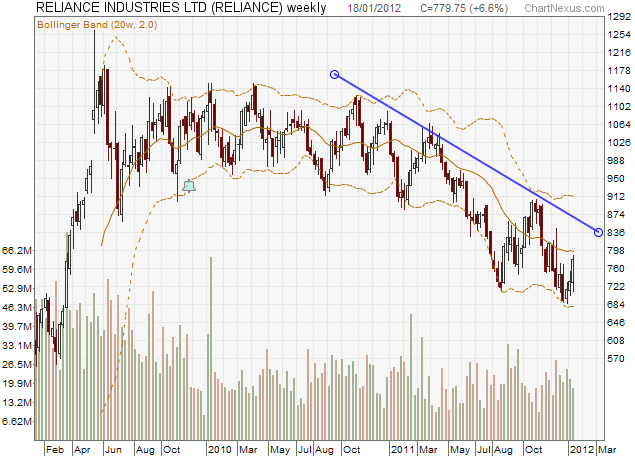 Will this announcement take Reliance to the next level? Chances are: no. They have to show great results. Their Q2 numbers were not great, and their gas and crude finds are in decline; for serious growth they have to rapidly increase investment. While a buyback at this level for the company is good (lesser capital to service), there will be large capital requirements coming in as they explore and find gas, invest in shale assets, expand the broadband/BWA offering, enhance their retail setup or indeed, make their massive refining operation more efficient. These are real game changers, not the buyback.

If the quick rise from the bottom – nearly 20% now – is exciting, then the game is in short term trading, not in a “buy and hope for the Ambani magic”.