The Reserve Bank of India has cut the Cash Reserve Ratio (CRR) for banks, as a percentage of deposits, to 5.5% from the earlier 6%.

This is, they say, to manage the liquidity situation, where banks have been borrowing a lot (1.2 lakh cr. last) from the repo window; this is much more than the usual figures of 40-60,000 cr.

Banks are up more than 3% over this move, which gives them some headroom in terms of having to borrow less from the repo window. Analysts have said that the increase in 32,000 cr. of “reserve” money in the hand of banks will result in a multiplier effect (lend and take that money as a deposit, lend again, and so on). A multiplier of 5 will result in credit growth of 160,000 cr. which is huge.

But I doubt that, because NPAs are growing as well. In the last couple of quarters, NPAs have gone up 0.5% (till September), and another 0.5% will negate the entire impact of the CRR cut. 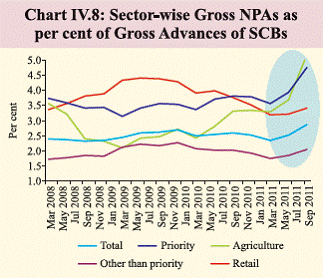 More importantly, the sectors in trouble are priority sector (mostly SMEs?) and Agriculture, where defaults are running at 5%. And the above chart is not including the massive restructuring of the Air India debt, the upcoming issue with Kingfisher, the large debt of GTL and then the many infra projects that are currently in limbo. (Since the chart is only till September).

Liquidity easing may just be a front – the real impact of the CRR cut will be that banks will have the cash to provision against more defaults. It is unlikely to create more lending. Recently, credit growth has dipped below deposit growth – another chart from RBI – for the first time since early 2010. 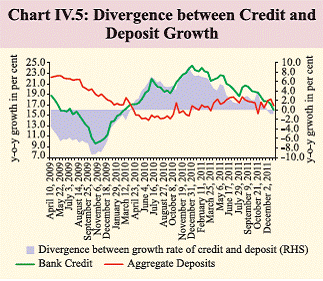 These are interesting times, no doubt. Combine it with a thorn in Greece that is threatening Europe and we find that things are much in flux.