Inflation for December 2011 has come in at a 7.47%, miserably low compared to 9%+ figures we have been seeing lately. But the downside is that prices haven’t actually fallen, they have at only been flat compared to November/October. 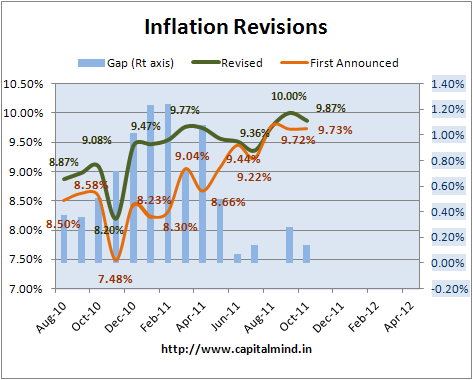 Lastly, let’s look at the components: 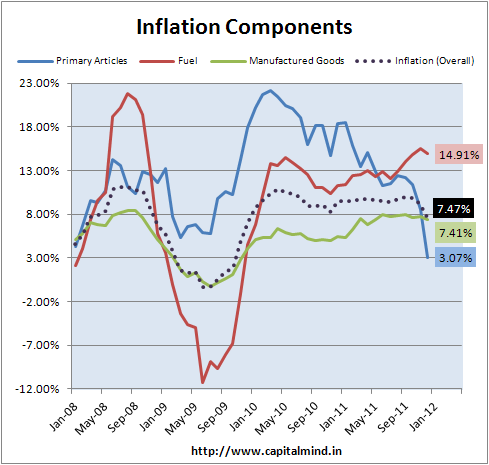 Primary articles inflation is now just 3%, but the rest of the components account for 80% of the index, and are looking dangerous. Fuel inflation is still near 15% – and this is with the crude price hike not being passed on through diesel.

Manufactured goods is still at 7.41%, which is strange because the falling rupee should have impacted that by now. Much of Indian secondary goods are impacted by the dollar as their input is eventually a commodity traded internationally (Rubber for tyres, metals for cars etc.). There are only two reasons that prices haven’t gone up, officially:

a) Companies are using their inventory to exhaust current supplies of input products, and therefore not increasing prices. This will lead to an eventual increase anyhow as they exhaust their input pipelines, and have to secure new supplies at higher prices.

b) There is no proper reporting – that prices have gone up, but the WPI is just not reporting them. This is a more likely cause, as I have seen. The price of Coke (not the drink, the fuel) has not been updated since March 2011, and coking coal is unchanged since Feb 2011. In the real market, the prices are up substantially, but the WPI guys use the rate contracts at Coal India which haven’t changed due to political pressure (after all there is a shortage of coal of all sorts, prices MUST go up). International prices of coal have gone up. That means we will eventually see a big price increase when the price update actually happens, so your 9% numbers are likely to come back.

Finally, with a long period of inflation, we actually need to see much lower numbers. The next two months – Jan and Feb – will likely show high headline inflation figures (many rates go up in Jan, like Milk).

In terms of RBI action, I expect them to not raise rates, but not cut them either. Growth continues to be strong, and inflation needs to show stability before the RBI can reverse policy.