Nine Lakh Cr. stuck in risky sectors, says Firstpost. Even a 10% loss on that will hugely hurt bank capital, but the figure is exaggerated.

“There is an enormous difference between a market opinion and a market position”, says Peter Brandt. A great post by an experienced trader. Lose your opinion before you lose your money; it’s silly to tell traders how they were wrong a month back, perhaps.

EU Carbon Credits have fallen off a cliff (From barchart.com) 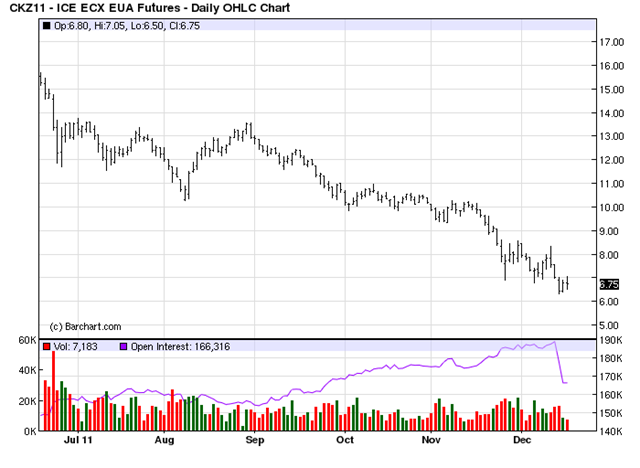 Stocks like SRF and Suzlon get income from selling CERs, and if the prices have more than halved, the stocks will see a decline in income. But the stocks have been beaten up so badly it might not even matter!

Kingfisher grounds 15 more aircraft. Can’t afford maintenance expenses now. That stock is at 21 rupees, which sounds like 21 rupees too many…