(From my article at Yahoo)

While derivatives have been called weapons of mass destruction and worse, they can provide alternative methods to participate in the markets. To a bystander, these instruments seem complex — and some indeed are so, with SEBI now requiring brokers to ensure that investors are financially capable of handling themselves before they can trade derivatives.

An alternative way to buying stock is to use a "future". Instead of having to buy equity into a company and paying up the full amount of money, we use a derivative and buy the future instead, paying only a margin amount upfront, and putting the rest of the money as cash, which can earn interest in a liquid mutual fund. I tracked the stock of ICICI Bank, bought directly versus buying with a future, since 2006: 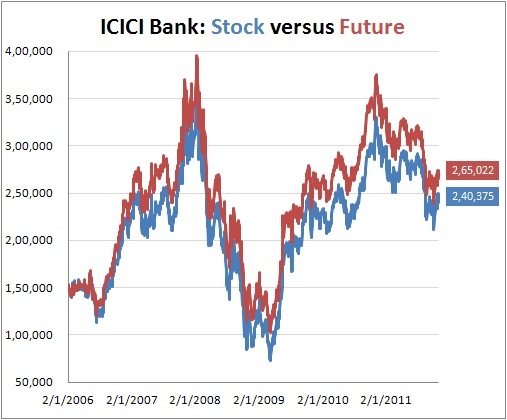 The futures approach is 10% higher in terms of total return over 5 years! But is it really better?

The correct answer: it depends on who you are. The disadvantages of this system are mainly in the taxes.

a) You get no dividends with futures. While the gains might be baked in somehow, dividends aren’t taxed in your hands, so a certain percentage of the dividend gain is lost.

b) You get taxed as business income: Futures trading is considered business income, which is taxable. If you were to lose 30% of your gains to taxes, that negates the entire difference with buying stock. In the example above, the stock gained a total of Rs. 90,000 for which, because of tax rules in India, you pay no tax. (Long Term Capital Gains is nil) But the gain through futures is Rs. 115,000, and a 20% tax will bring it down back to the levels of the stock gain itself.

c) You get no voting rights. Derivatives provide no ownership rights. But hardly any investor votes nowadays, so this is not so much a disadvantage.

d) The process has pain. With a rollover every month, and mark-to-market gains or losses that need a transaction every day, it’s a lot more effort for the lay investor.

The "who you are" helps: for many foreign institutional investors, gains or losses may not be subject to Indian tax laws, in which case the above disadvantages are irrelevant. It would help many Indian institutions as well (such as mutual funds or insurance companies, which aren’t taxed on gains) but they have strict regulations about how much exposure they can have in derivatives.

Lastly, a trader or a proprietary trading house might benefit from using futures; the taxation disadvantage might be offset by business losses or valid expenses, and will justify the returns.

And there are advantages. For one, you can participate in the downside. Sometimes stocks get overvalued, and it is considered proper trading to short-sell a stock, expecting to profit from a price decline. But in India, you can’t short-sell stocks, because there is no liquidity in the "borrow and lend" market.  Futures give you an easier way.

Creeping acquisition rules do not allow individuals to hold stocks without notifying the exchanges and thus, the public — so a large chunk of shares acquired will trigger interest and could take the price high before an organization can finish its buying. Futures, on the other hand, have no disclosure requirements so a buyer could participate in the growth of a stock with no one else ever getting to know.

This lack of disclosure creates many problems as well. In 2008, shares of Volkswagen went up more than three times as Porsche, its owner, declared that it now owned 75% of VW through some derivative instruments. Short sellers — who had a negative view of the stock — had to scramble to buy back shares which were not available (as Porsche had effectively cornered most of the free float), and for a while Volkswagen became the world’s most valuable company. The main issue was that Porsche never disclosed the stake, since it wasn’t required to report derivative positions. Regulators have realized that derivatives need to be brought into similar disclosure norms that equity shares require.

In India as well, Reliance Industries got into trouble — and still is — for having profited through derivatives in the shares of a subsidiary (RPL) before it sold shares on the market. While creating a hedge, Reliance had used futures to short-sell RPL shares that it eventually sold; but it seems that in the process, it took on greater positions than would be considered a hedge, and therefore is being investigated for insider trading.

It is also quite likely that much of the insider trading market has moved to single-stock futures. Promoters must reveal every single share they buy or sell, but not their futures and options trades. On a piece of news that is known only to a board member, a quick profit can be made through a futures transaction with very little chance of being caught. I would be surprised — given the low level of enforcement or investigation in futures trades — if this is not rampant.

Finally the derivatives bazaar gives you the ability to take more than a "Stock Will Go Up" or "Stock Will Go Down" approach. You might believe that a stock will stay in a range. Or, that the stock will go down, but not too far down. Or that it will go wildly in either direction.  With the use of options, along with a stock, you can create synthetic positions that let you profit from even such imprecise notions. Traders have named them exotically, so you will hear of Strangles, bearish put spreads or straddles — the respective positions you will use to trade the aforementioned beliefs.

It is such synthetic positions that have been used to create "structured products" — where, with options, futures and cash management, a financial product can offer you "complete downside protection with 100% upside" — meaning, you lose no money if the market falls, but you make just as much if it goes up. These products are very useful for a risk averse audience, who might otherwise never even participate in the markets.

Given that we just saw a global crisis because of abuse of derivatives, it is only logical to be afraid of them. But if real estate stocks have fallen 90%, stocks aren’t necessarily risk free either. If you consider that we sit in November 2011 at an Index level that is about the same as January 2010, that the US markets are about at the same place they were 11 years ago, or that Japan has fallen 75% from its highs 30 years back, it will seem useful to explore alternative investment strategies that don’t require the market to go straight up.