The September Quarter GDP numbers are out and we have a headline number of 6.9%. 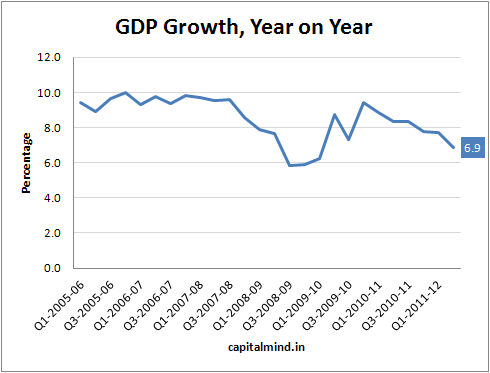 Note that this is released by MOSPI which is notorious for revising data without giving any notice. That means you can’t trust this data very much until maybe a couple of years have passed, making it completely illogical to report, but it’s all we have and I honestly must demand my tax money back. But leave that aside. Agriculture has slowed down to less than 4%, but that’s before this awesome monsoon. Mining went negative to –2.9%, as corruption cases thrived, and Manufacturing slowed to about 2.7%.

Staying strong were electricity, Trade and Financial services – around 10% growth over last year.

Overall, there seems to be a slowdown, but Agriculture will recover this quarter, and mining is showing signs of activity as the courts run through cases. Manufacturing remains a concern, of course.

At a nominal level, we are still growing at 16%! The nominal GDP was about 20 lakh cr. Private consumption grew over 16% and government spending, about 13% – making the bulk of the growth. Investments (GFCF or Gross Fixed Capital Formation) was around 12%, the lowest growth since the negative figures of 2008-09.