The Exchange Traded Fund (ETF) named UTI Sunder, that’s supposed to track the Nifty. But the price on the exchange seems to have varied wildly from the NAV of the fund itself (which is just a mutual fund that invests in the Nifty components). But in one month the ETF has gone from 900 to 2000, completely out of whack. 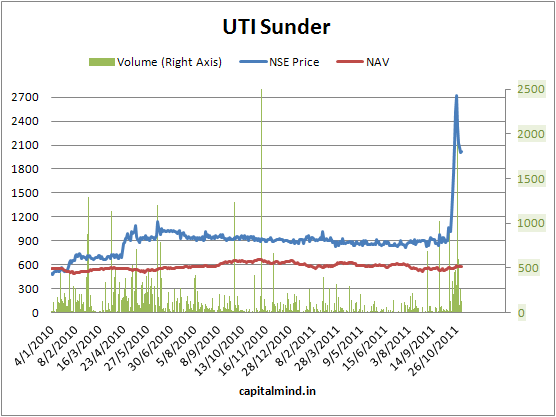 UTI has issued a warning that it smacks of manipulation, and that it might merge the fund with some other fund (UTI has other index funds). But this is not when it started – the ETF has been out of sync with the NIfty since the beginning of 2010. In Feb 2010 it surged up (while the Nifty remained benign) and repeated that action in April 2010. Presumably UTI was sleeping since then and has just woken up.

The latest fact sheet shows the fund has just Rs. 75 lakhs under management with just 300 investors. If you’re holding this fund, sell it. If you’re not, stay the heck away.