Network 18 has something funny going on. According to me, the company is helping its own promoters buy more shares.

Let me put forth some evidence.

3. Now I check the Network18 annual report. It reconfirms the fact that this is part of the promoter group, but has a few very important notes.

4.  Network 18 has given as security, part of its investments, to lenders who have lent over 255 crores to this promoter group entity.

Security provided given in favour of lenders in connection with loans to NT18Group Senior Professional Welfare Trust Rs. 2552 million.

(The NT18 and Network 18 prefixes point to the same company – there’s only one such company mentioned in the promoter list.)

Note that this is also not entirely legal. Promoters giving money to companies = okay. Companies giving their money to promoters = not okay. Because other investors must question why that money isn’t available to them.

5. Why the heck should a company give 255 crores of its own investments, as security, against a loan to a promoter entity? It is usually the opposite – promoters pledge their shares so the company can get a loan. Often, promoters do give their shares as collateral when the company needs a loan, because they are in control of the company and can ensure that the loan will be repaid.

But the other way – the company giving collateral for a loan taken by promoters – is very shady. Because there is no control that the company exerts over its promoters. Other investors must be wary.

6. And the promoter company is using that money to buy more shares! You might say they use they money for something else but buying shares from other sources of income, but phooey – money is fungible.

7. Effectively, Network 18 is helping its own promoters buy more of its shares.Remember:

a) the shares being bought are not “fresh issue” from the company. Companies are allowed to issue promoters “warrants” that involve the promoter putting up some money in return for more equity. In this case money flows to the company, equity goes to the promoter.

This is brazen. I don’t know if it’s illegal, but it sure as hell should be. The investments that are pledged are the property of all shareholders – why should the company use them to help the promoters buy more shares?

8. Yes, some of you might think this is standard practice for an ESOP trust – which should buy shares in the market to cover ESOPs which, when exercised, will return money back to the company.

I checked the ESOP situation, and they have around 7 ESOP plans in place. Added up, their own report shows:

The trust owns more than 10x the number of ESOP options outstanding. No, this purchase is way beyond the ESOP requirement, so why is the company funding it?

9. But there’s even more. In 2010-11, according to the annual report, Network 18 gave Rs. 55.25 crores to the trust as a “Loan/Advance”. The trust, which had in the previous year taken over 147 crores as a loan, has then returned 202.83 crores back, leaving it with zero balance. This is strange, but stranger is this declaration:

The financials of Network 18 Group Senior Professional Welfare Trust , a trust formed for the welfare of past and present employees (including Directors) of the Company and its subsidiaries have not been consolidated since ,as per the management , it is not likely that any economic benefit will flow to the group from that trust.

Er…now I understand. Perhaps the economic benefit is only designed to flow in the other direction.

A quickly done flow chart to describe the situation: 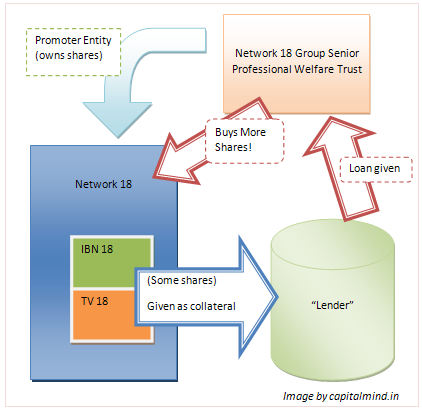 Other murky stuff out there involves a loan of Rs. 25 cr. to “BK Media Private Limited”, a promoter owned entity.

The 8% Cumulative Redeemable Non Convertible Preference Shares of Rs. 100 each in BK Media Pvt Ltd, an entity owned and controlled by the Managing Director of Network 18 Media and Investments Limited are (a) redeemable at the end of 5 years from the date of issue, unless otherwise agreed by the Company and the issuer company and (b) proposed to be secured either by a personal guarantee of the promoters or by way of a first charge on all assets created or acquired by the issuer company.Note Non impairment .The investee
company is incurring losses and has a negative Net Worth. However, having regard to the continued long term strategic involvement, management is of the view that no provision is considered necessary for diminution in the value of these investments.

I suppose this will also be palmed off as standard; but a company making a loan to a promoter group entity, which is incurring losses, and then saying that it won’t even take the hit on its balance sheet – this is really sad stuff.

Is it a wonder, then, that people think of India as a corrupt nation? I’m sure there is some legal loophole that allows this practice but as an investor, you should be very very wary of such companies that, directly or indirectly, loan money to their promoter owned entities which then buy more of the company’s shares. It’s a shame they run a business channel that is supposed to unearth such practices.

(Oh, btw, if someone knows a better explanation for the above facts, please let me know)

Disclosure: I have no positions (long or short) in Network18 or any of it’s subsidiaries.