In a new notification, the RBI has provided for a complete savings bank rate deregulation, in which banks are allowed to set their own rates for savings bank deposits.

A savings bank (SB) deposit is what is called a checking account abroad, which you can write cheques against, and where money is withdrawable “on demand”.

Current accounts are similar, except they don’t pay any interest.  SBs have traditionally been a big source of bank funding — from 1970, which is when early data is available, SB accounts have constituted between 20 and 29 percent of all deposits: 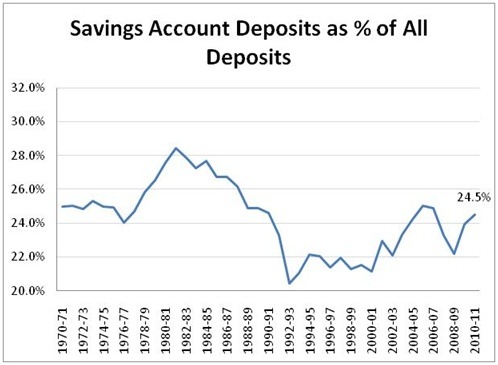 SB accounts are an incredibly low cost of funds for banks, who used to pay just 4% as interest. Consider a bank like ICICI which has 29% of its deposits from savings bank accounts, and another 13% from current accounts (paying 0% interest). Even if they paid 10% on the remaining, their overall cost of funds will only be 6.96%.

If a bank lends at a rate of 12% (average) they will make a spread of 5%, a reasonably high number. These spreads are offset by costs — of setting up branches, of printing chequebooks, of validating and clearing cheques, of paying out money on demand. Banks like State Bank of India, Punjab National Bank, HDFC Bank and ICICI Bank have a big branch network, which helps them gather such funds and with a capital cost spread over a large amount, the cost impact on margins is also low. Effectively, these banks have been making reasonable profits on the back of low-cost savings deposits.

It is broadly estimated that all banks will have to follow suit, and the cost of funds could go up as much as 1% for savings accounts. This involves a payout of Rs. 14,000 crores as interest, and that will dent profits substantially; by upto 20%.

I doubt the large banks are in any hurry to raise savings bank rates. If anything, they’ll look at ways to cut it down now, largely because their customers are a bunch of lazy, financially illiterate people who won’t shift away easily.

1)      Even before this announcement, people could easily have placed their money in a fixed deposit account — yields are 9-10% – and move money back when required. To facilitate this process, “sweep-in” FDs were provided, where money was automatically moved to your account if you overshot.

2)     The most efficient way would be to place your money in a liquid mutual fund — which have provided 8% to 8.5% returns. Some liquid funds also provide ATM and debit cards to spend directly from the fund.

Yet, evidently, customers preferred to use savings accounts rather than the above, rational alternatives.

Secondly, the cost of switching can be a deterrent. If you have a brokerage account or a mutual fund investment, those are linked to bank accounts that you gave when creating them; changing them involves more paperwork. Certain banks may not have all required features when using their online banking services, which means more trips to the bank. In all, you incur a cost when you switch SB accounts, and for that miniscule benefit it may not make sense.

Thirdly, restrictions on usage may continue. Corporate salary accounts might dictate what you use because they want to transfer salaries using a bank’s online’ service rather than to use cheques. This means you will need to have an account at the bank which your company deals with, and then transfer money to wherever your operational account is. The additional hassle may not be worth it. If you have paid rent through post dated cheques or are paying an EMI through a bank’s electronic clearing service, you will find yourself unable to change accounts easily.

Finally, people aren’t rational. None of the factors above are so cumbersome that they can’t be done. Nowadays all it takes is a phone call and a few clicks of the mouse. Yet, even if you demonstrated to people how they could have made X rupees more by going with an FD/Liquid fund approach, they could nod their heads and still leave the money in the savings account. Someone I know has more than 10 lakhs in an SB account which they don’t even use; but they are too lazy to go move it to Fixed Deposits.

So banks might not need to increase rates on the upside. On the other hand, if rates come down, you can be sure that SB rates will go down like everything else.

Let’s assume that to maintain competitiveness, banks do increase rates on savings accounts. They will then try to nickel-and-dime you on charges that you normally wouldn’t pay for. Internet banking remains free today, as do ATM usage or cheque-books. But slowly, over the past few years, charges on account usage have appeared — want an extra cheque-book? We’ll charge you. Want a bank statement going back one year? We’ll charge you. Want a debit card? We’ll charge you. Charges now exist if you visit a bank or deposit cash or for cheque returns. Banks earlier had threatened that service fees for banking would go up if savings rates were deregulated — it appears now that service fees have been going up surreptitiously anyway.

RBI is looking to issue new banking licenses, which should take the number of scheduled commercial banks up from the current 80. We should have hundreds of banks, and eventually have enough competition that any petty fee charging would instantly cause us to move.

Also, the importance of a particular bank’s savings account is starting to come down. Service levels in all banks are rapidly converging. Usage is going electronic and faceless. Already, I issue just two cheques a month — a rent cheque and one to the local society for maintenance. For everything else — phone bills, petrol, supermarket, broadband, even coffee – I use a credit card, and I make an online transfer to pay the card bill. I can quite easily manage this through any bank account today; I don’t really care about their relationship managers who only try to sell me insurance. If I opened a new account that gives me 2% more, I can retain my old account and operate from the new one in less than a day, moving money between each other whenever needed; and I’ll feel little pain.

While I don’t think this measure itself will cause people to move accounts, it could be individual bank behaviour that prompts an exodus. As the larger banks attach fees to what we have always got for free, we will decide to move, and due to the competitive nature, new banks will make it easy for us. However, this dynamic will take some time to play out, as banks battle out interest rates against ridiculous fees. Eventually, the larger banks will have to give up a little profitability from the deregulation, but they’ll profit when rates crash as well. The system is better with unregulated rates than otherwise.