Sintex announced results post market hours, at 3:45 pm today. While revenues are up 25% to 1154 cr., the net profit has dropped 61% to just 38 cr. from 101 cr. Much of this loss was due to Foreign Currency Convertible Bonds (FCCBs) based losses. Companies that borrow through FCCBs (in foreign currency) have to make an allowance for the exchange rate changes. A fall in the rupee means they have to pay more in rupees than earlier and this is considered a loss.

It might be noted that Sintex has 25% higher revenues and FCCB losses are “exceptional items”. In fact Sintex’s press release embodies that fact:

Fundamentally, this stock doesn’t show great signs, though I’ve heard of a few people looking to “buy on dips”. (I think that’s a dangerous term)

The stock has declined a lot, so it’s not a great technical buy either: 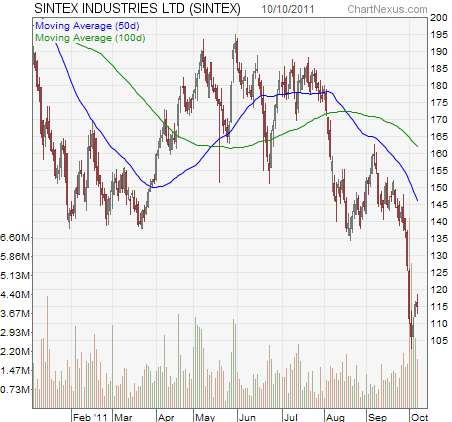 Perhaps there needs to be serious strength – beyond the 160 high – for a purchase to be worthwhile.