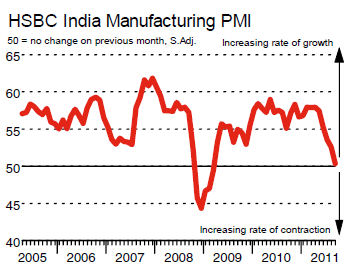 Above 50 is expansion so we are still growing, but at a considerably lower pace. Noteworthy is that export orders were contracting due to “weaker global economic conditions”, and that inflation pressures remain firmly in place.

The Composite PMI (includes Manufacturing and Services) declined to 50.2 from August’s 54.5, a very big drop and the lowest since November 2008, which was a pretty horrible month if you remember. Services by itself went to 49.8 down from 53.8, suggesting some contraction. We’re slowing. It now needs to show in decreased inflation figures over the next six months – the RBI will be careful to not reverse their moves unless they see a sustained drop.