After a reasonable performance by Infosys, Reliance has provided a decent set of numbers. Reliance has the highest weight of any stock in both the Sensex and the Nifty.

I’ll do this through a lot of charts. Not only is text less intuitive, the graphs provide a far better frame of reference.

Revenue’s come off the last quarter but is 37% growth, year on year. EPS has grown about 15%. 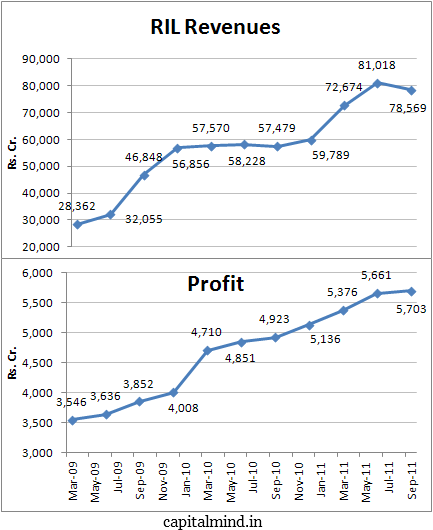 EPS growth which was quite spectacular earlier has moderated now. 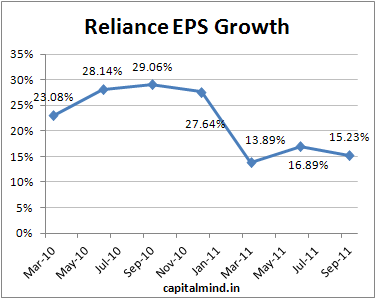 (I know, this is looking at only the last 8 quarters, but this is when the momentum was strong – and before this the RPL merger had kicked in and that screws up comparisons)

Having sold 30% in a few exploration blocks to BP, they got a ton of cash (all of it has been realized, they say) and the situation looks good. 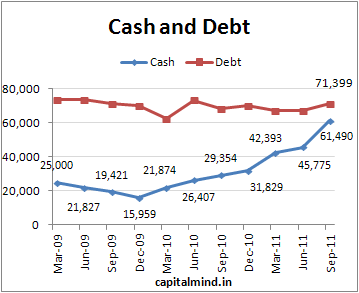 There are 3 broad segments RIL is in : Oil and Gas Exploration and Production, Refining, and Petrochemicals. It does have other businesses – like the retail play, the venture into Broadband web access, and the insurance play, but these haven’t yet been fleshed out in the results. 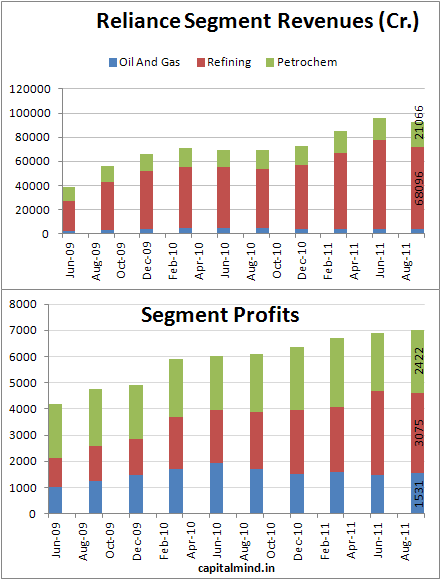 (Profits are before interest and taxes)

Interestingly, the Oil and Gas division gets the least revenue of the three – it saw just 3563 cr in Q2 – but it forms a good chunk of the profits. Refining and Petrochem are great on volumes but low on margins.

Oil and Gas: Slowing Down?

I had to painstakingly gather the information about their Panna-Mukta, Tapti and KG D6 refineries and map them together. (Tech note: they gave information sometimes in “million barrels”, other times in “million tonnes”. For gas, it was either MMSCM or BCF. I manually converted. Yes, it was that kind of day.) 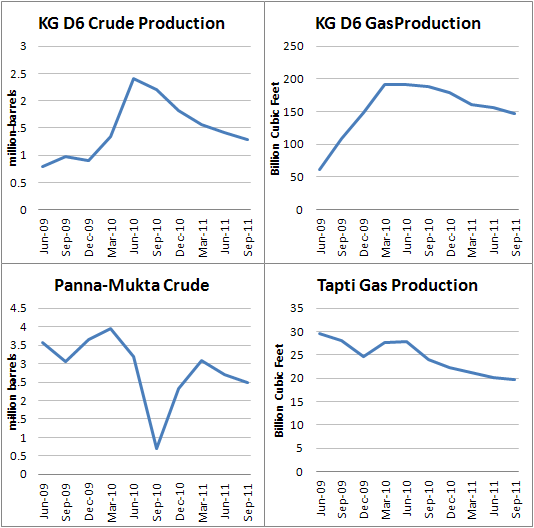 It seems like much of the oil and gas production is slowing. While their BP deal gives them a good potential in that BP will provide technology to perhaps increase output in KG-D6, or that they’ll find more oil elsewhere, the problem at Panna-Mukta and Tapti is that there is a natural decline.

The biggest segment of Reliance is the Refining one and they benefit from being able to process heavy sour crude like that of Saudi and Iran, which trades at a discount to the more easily refinable light-sweet. Refining margins per barrel of crude determine this segment’s profitability. The GRM movement is steady now: 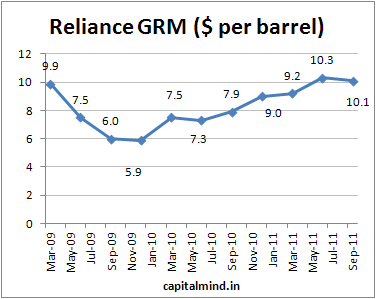 At $10.1 per barrel the rate is reasonable but one would have expected more. Libya supply is short and that’s driven the price of light-sweet up a lot, so one would imagine the light-heavy difference would have widened. Apparently not too much.

This bit is disappointing. Since this is a very narrow margin business (EBIT is less than 5% of revenue) any small increase can make a big difference to the bottomline.

Petrochem: Not growing much

The production of petrochemicals hasn’t had a massive increase in the last two years, with the EBIT in this segment being just 10% higher in two years (2200 cr. in Sep 09 to 2422 cr. in Sep 11). This is despite nearly doubling revenue in this segment in the same time. 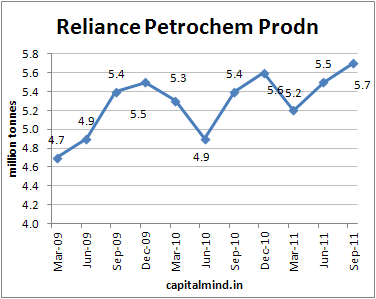 Realizations and costs here are heavily linked to commodity prices and crude, and the margins here seem

I think the current price is a fair price for Reliance – in fact at a P/E of 13, it might actually be affordable, if it can grow EPS at 15%. The net debt is low (good) and they have been able to stay out of the corruption investigations (for now). However, commodity prices will continue to fall and inflation and increasing interest rates abroad will build a ceiling, and their flagging oil and gas divisions will need a period of lower revenues and consolidation before they can pick it up again.

Disclosure: While I’m not long the stock, I do have some open long call options that I bought primarily to benefit from results. And if you ask me the stock might not react too favourably from these results – since it is up over 13% in the last six days. (I’ll probably break even since I sold half my positions at a profit on Friday)

Oh yes, would love your comments.