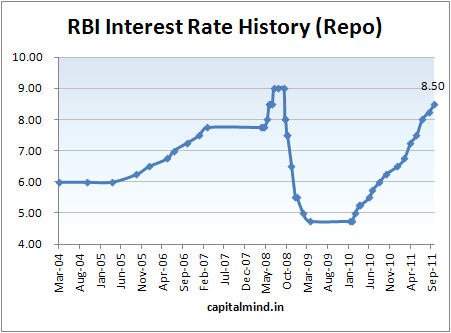 The Cash Reserve Ratio, or CRR, which is the percentage of deposits banks need to keep as reserve with the RBI, stays at 6%.

RBI indicates that there may not be further hikes this year:

The projected inflation trajectory indicates that the inflation rate will begin falling in December 2011 (January 2012 release) and then continue down a steady path to 7 per cent by March 2012. It is expected to moderate further in the first half of 2012-13. This reflects a combination of commodity price movements and the cumulative impact of monetary tightening. Further, moderating inflation rates are likely to impact expectations favourably. These expected outcomes provide some room for monetary policy to address growth risks in the short run. With this in mind, notwithstanding current rates of inflation persisting till November (December release), the likelihood of a rate action in the December mid-quarter review is relatively low. Beyond that, if the inflation trajectory conforms to projections, further rate hikes may not be warranted. However, as always, actions will depend on evolving macroeconomic conditions.

They expect GDP growth to go down to  7.6% for 2011-12. This is a result of both monetary action and global developments.

Savings Bank accounts have been giving a rate of 4% (recently upgraded from 3.5%). This was a fixed rate, and many banks used that low rate to good effect, offering customers substantial benefits if they kept money in an SB account.

Now, the RBI has changed this policy and allowed banks to set their own rates for SB accounts. With two restrictions:

a) All amounts below Rs. 1 lakh should get a uniform interest rate (per bank).

b) For above Rs. 1 lakh, banks can have a different interest rate based on amount, but banks can’t differentiated based on customer (like “premier” or “senior citizen” or whatever).

While this is prima-facie negative for banks, do not underestimate their ability to act like a cabal and collectively keep interest rates low. To avoid such a deal, I will note how banks change their SB rates and accordingly, move my transactional money to different accounts (currently HDFC bank).

The RBI statement is:

That committee has recommended removal of pre-payment penalty for floating rate loans completely, and also for fixed rate loans where you don’t refinance the loan from another bank.

This is negative for banks. Great for everyone else, obviously.

Banks can also open branches without permission in Tier 2 areas (population from 50,000 to 1 lakh) – this was earlier limited to Tiers 3 to 6 only.

They will let Credit Default Swaps (single name corporates happen after end-November 2011. These should have started yesterday and were postponed.

RBI will also allow short selling of Govt securities with a clearer policy by end-December. Plus, market traded 2 and 5 year interest rate futures will be allowed, and they will look to expand liquidity in the G-Sec markets (please involve retail!).

Given that it is expiry day, and volumes recently have been low, and this is Diwali week involving holidays the next two days, I would not give too much importance to movements today. What is important now is to hear how banks change their lending and deposit rates, and to brace for the lower growth rate that RBI is talking about. I believe we will slow down substantially more by 2013, with inflation remaining high after March (when the base effect is gone).