(My Yahoo Piece on Infy results)

Infosys announced Q2 results (September 2011) today, beating expectations substantially. Revenues were up 8% from last quarter to 8099 cr. and Net profits up 9.73% from last year, to 1906 cr.

The stock is up 5% and has lifted the index up with it, with both the Nifty and Sensex up 1%. 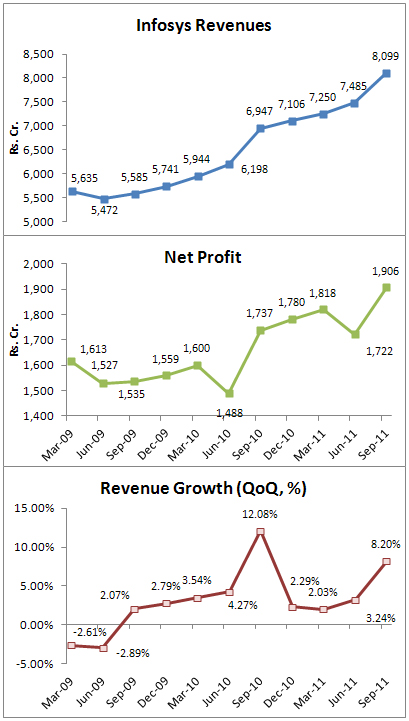 Revenue growth has returned but much of the spike is from the strong dollar. In dollar terms, Revenues grew 4.5% (QoQ) — the remaining has come from the dollar move. The USD-INR equation has moved 4% in their favour (from an average of 44.78 to 46.3)

Despite the dollar move, the EPS growth wasn’t impressive; at 9.7% in rupee terms and 9.9% in dollar terms, year on year, EPS growth looks incredibly small given that the dollar has risen. Since 54% of Infy’s revenues come from onsite work, those expenses are also in dollars, which negates ,to a certain extent, the rise in the dollar. 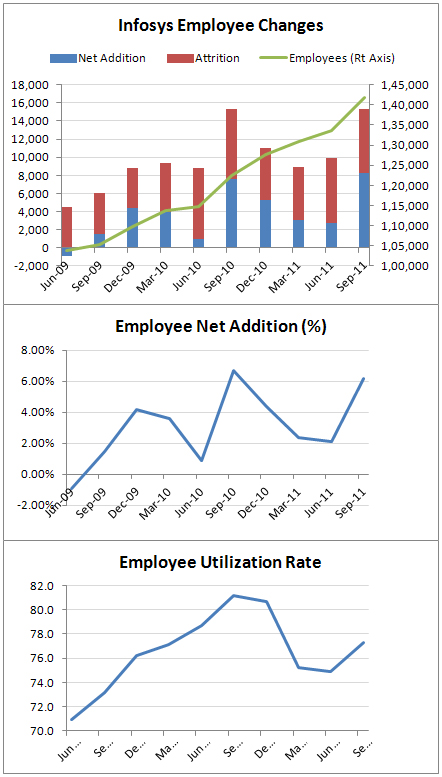 September is usually a great quarter for hiring and this one was no different. With over 15,000 people hired, and a net addition of 8,262 employees, Infy sees its employee strength go to 1.42 lakh people.

The attrition rate remains around 16%.

Utilization has gone up to just about 70%, which is a good sign. Strong hiring and good utilization usually means continuing business — there isn’t much of an impact of the global slowdown (yet).

Infy increased Time and Material (T&M) Billing this quarter, which is lucrative because you can bill more if you add more people. 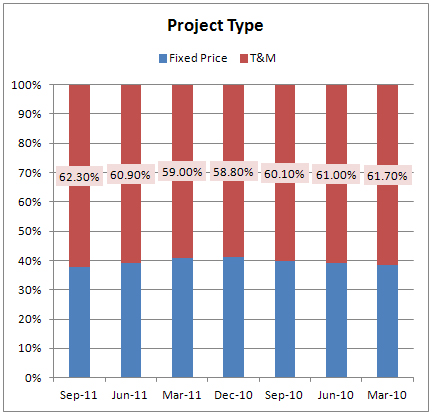 The kind of work they do hasn’t changed substantially — slowdown or not.

And finally, they have moved away from Europe into America, which is probably reflective of the troubles in the Eurozone. The P/E has come down substantially with the recent price fall and hovers around 20. 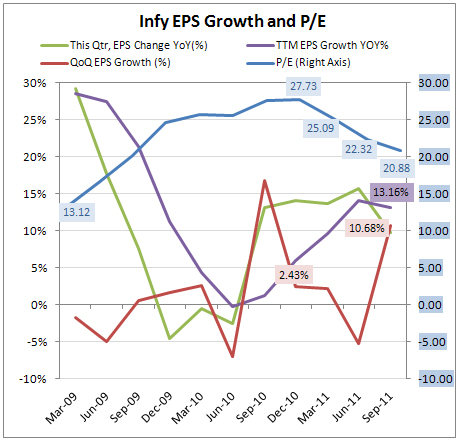 The problem is that the Trailing Twelve Month (TTM) EPS growth has softened, to just 13.16%. They do expect to grow more in the coming months (to 21%!), but much of that will come due to a weak rupee, if it remains so.

Risks to growth will be a strengthening of the rupee back to the 44 levels, or a much larger crisis in the west (85% of their revenues come from North America and Europe).

EPS Growth this quarter has come down to less than 10% after a great quarter last year.

For the next quarter, Infy expects both Revenues and EPS to grow between 24% to 26% (YoY).

Current Trailing Twelve Month (TTM) EPS is 126.46, which has grown just marginally from the March 2011 year end EPS of 119.41. So most of the growth needs to come in the next two quarters.

How likely is that? Debt ridden Europe, a hurting US, potential slowdown in China — all point to a tough H2 for this year. In it’s favour, the company always gives muted guidance and outperforms it — this time their guidance itself is strong. Infosys has been known to pull rabbits out of hats every once in a while, can they do it now?