Every year, I do my annual Diwali predictions, and this year will be no different. First, wishes to all of you for the festival of lights. I don’t know why it has become the festival of noise and horrible sounding firecrackers, but as a father of a one month old (Happy Birthday Zubin!) I would personally like to dismember every after-10-pm-firecracker-burster. It’s the spirit of Diwali, you see.

Stuff I said last year, which needs a recap.

Currency wars will continue. The US keeps trying to depress the dollar, while other countries try to keep theirs down too (Japan, China, India) While status quo can continue for the whole year (who knows how big the situation needs to get) what it will mean in inflation in the non-western-world except Japan. But exporters will rally around the need to keep exchange rates in their favour, while cheap money from the west keeps flooding into Emerging Markets. I predict that in the end, the emerging currencies will go up substantially.

Currnecy wars did continue. The Yen is close to it’s highest to the dollar, and China has pushed up its own currency. But this is such a global statement I can’t take marks for it.

But I was wrong on timing – that the emerging countries will go up. The dollar has remained strong through the latter part of the year.

India will face inflation and currency wars in a topsy-turvy way. The higher their interest rates, the more foreign money comes in to push up the currency. Try to get currency back down, and you stoke inflationary fears. And most of that foreign money might not be long term, so there will be the fear of it running away right back in a crisis. I think we’ll see strong fund flows anywat and regulatory efforts to curb equity market hot money, but the journey will be interesting.

India will face inflation and currency wars: Oh yes, Plus one.

India will see strong fund flows: Not really. There’s not been much flow in either direction. Minus one.

India’s real estate bubble will continue for a while. I can’t say it’ll end next year – who knows, like I said – but at some point, high interest rates and regulation will stifle demand. But as long as fund flows remain strong, I doubt we’ll see the end of the real estate madness.

Prices have gone up since last year, so Plus one.

There will be a lot of interest in stock markets, if we cross these all time highs.Already, there are too many that feel they’ve missed the ride. Now, with the cushion of governments offering to clean up if there is ever even a jiggle of an alarm bell, there will be that feeling that says let’s get on this bus again. The consequences may be unfortunate, but I’m not sure the bubble will choose 2011 to end.

To be honest we never crossed that all time high in October 2010. The consequences were unfortunate, but the bubble did choose 2011 to end.

Now again, I think I weaseled out of making a commitment so I won’t take any points.

The best businesses to trade will be midcaps. They will go up (or down) a lot more, and provide more trading opportunities. In the larger cap area, watch public sector banks which I expect to beat the market until March 2011.

That is true. The biggest winners and losers are midcaps.

Did PSU Banks beat the market till march? 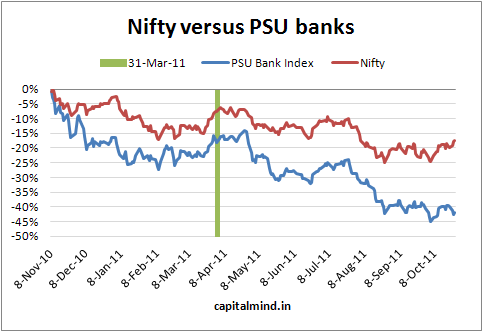 Well, company not yet successful, but family top priority and one more addition. Hugely proud that I can give a lot of time to Z and V. Success will come, you can’t screw up the journey.

I also picked up two stocks – Ashok Leyland and Elecon industries. I exited both at a 10-15% stop down, which in retrospect was good because Ashok Leyland has fallen nearly 40% and Elecon, 25%.

Net net, I make a thousand points for the best prediction of the year in a blog named Capital Mind. If you narrow it down enough, you can always find a place that you are #1.

Predictions for next year

Of course these are not great predictions – they’re very open ended. That’s because I largely have no idea what is going to happen, and I’m using today’s information to decide. Basically what I’m saying is:

I can’t predict anything with certainty for the next one year. I honestly don’t know what’s going to happen. When I get enough “confidence” that something will happen, I will react to it.

That’s how the game is played. You don’t win points for predicting stuff one year ahead. You win points for adapting, and if that’s the one thing I do right the next year, I will be happy. Also of course, retain my sanity as the two young fellows grow up.

Enjoy the holidays, and I’ll keep you posted on new developments. Thanks for reading!