On Friday, the Reserve Bank of India will release the mid-quarter review of Monetary Policy (12 noon). Will it raise rates again, after 11 consecutive rate raises? We have seen rates rise from the 4.75% lows to 8% on July 26. In the mid quarter review, large policy decisions are not something we should see; it’s supposed to be just  a review.

So no, just because it’s a review doesn’t mean big things can’t happen. And yes, it’s a good thing, because three months is too long to wait in the fast information age.

January started at 6.25% but the Jan meet saw RBI taking that up to 6.5%. March saw a 25 bps hike to 6.75%. In May we saw a hike of 0.50% in Repo along with a slew of policy changes, such as introduction of a penalty-rate Marginal Standing Facility, higher provisioning requirements, increased Savings Bank Account rates and so on. In June (I was on holiday, so no post), the repo rate was hiked another 0.25%. July saw a hike of 0.50% 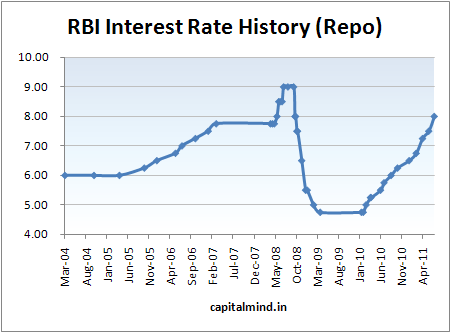 Raising rates was always meant to control inflation, which doesn’t look like it’s really getting controlled.

The chart of inflation at the primary and fuel level: 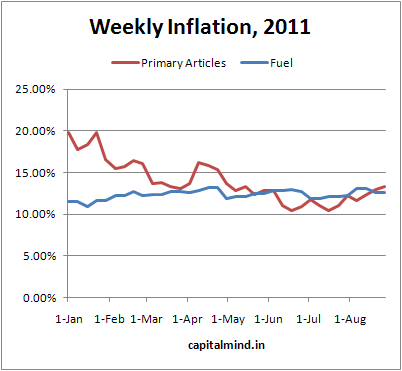 Inflation at the basic level doesn’t look like it’s ebbing. Plus, each new data release has revised past data significantly upwards, so there is some consternation that the recent numbers are even higher in reality.

There are multiple reasons that another hike is not necessary:

I think we get at least 25 bps. The RBI’s recent statements don’t seem very suggestive of a pause, and they really do a lot of gestures and postures before changing course. However, it’s important to keep questioning a theory; what do you think?