The rupee is trading at Rs. 48 to the dollar today, in the futures market. The RBI ref rate was at 47.1, and we are close to 2 year highs. The longer term chart shows that the 48 level was last crossed from below in October 2008, just as the Lehman crisis unfolded (it took the dollar to 52) 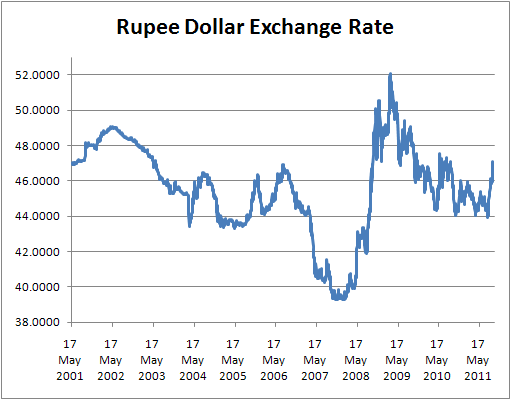 The exchange rate has dropped from 44 to 48 – about 10% – in a very short time. Given that we are a net importer, and oil prices remain steady (Brent) at above $110, the rupee drop stokes inflation higher as we will pay more rupees for the same oil.

In the short term, it means that interest rates will keep going up. There is no appetite in the RBI to reduce forex reserves and sell those dollars that it has, and the net outflow of dollars is likely to continue given the weak situation in Europe and the US. India as a policy maker inspires very little confidence abroad, as politicians fumble through fiscal issues and corruption continues to make headlines.

Is this good for the IT and ITES companies? In the short term, yes. But in the longer term, you have to offset that with the weakness in the developed markets, where new contracts may not be quite as forthcoming. Indeed, recessionary fears have caused a big slump in hiring in August.

Also, given that the last three big rises were before or during crisis situations, we can’t rule out a new crisis unravelling in the next few months. I’ll keep a close eye.