(From my article at Yahoo)

The First Quarter of Financial Year 2011-12 ended in June, and with nearly all results in, let us see how we fared. I gathered the results of 950 companies, and as an important caveat, used consolidated results where available. *

*  Most companies reveal only standalone results each quarter. Increasingly, companies are moving into a holding structure and own a majority stake in subsidiaries. This calls for consolidated financial results, which many companies now release. For Yahoo, we compiled a list of all results using consolidated data where available (and where Q1 of last year was also available in a consolidated format). Consolidated results number nearly 25% of all companies, and the results are substantially different from using only standalone data.
Overall Results

The 950 companies surveyed have more than 85% of the market cap of the index, with a notable exception of COAL INDIA where we do not have comparable Q1 figures for the previous year and thus has not been included. 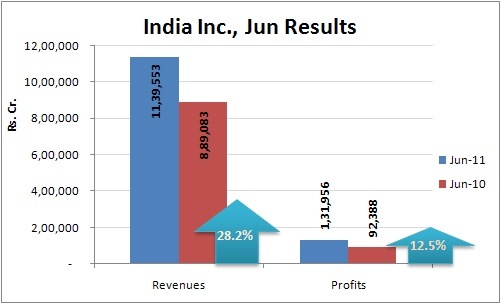 With over 28% revenue growth the story has been quite strong on the topline, but bottomlines have grown only 12.5%. Growing inflation and interest costs have started to hurt, but our growth has been remarkably strong in the quarter. 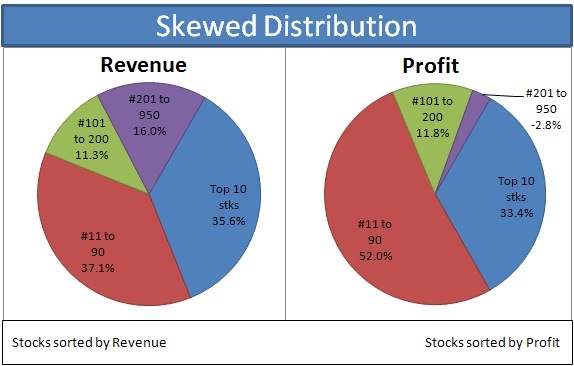 Let’s take a look at major indexes on the NSE — the Nifty (the top 50 stocks by market cap), the Nifty Junior (the next 50 after the Nifty) and the Nifty Midcap (the third rung of broad companies, so to speak)

There are a number of sector indexes, where we have included Financials, Realty, Infrastructure, FMCG, Pharma and so on. (Methodology: Add all the Nifty stock revenues and profits for the quarters ending June this year and the last, and calculate growth) 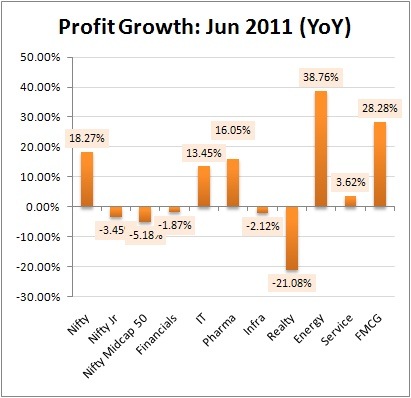 The Nifty’s performance was buoyed by:

Minus these two stocks, profit growth on the Nifty was a meager 5%.

On a sector basis, the Energy, FMCG and Pharma sectors have done the best, and in general they are defensive sectors. IT, which has been seen negatively due to the slowdown in the west, managed to eke out 20% revenue growth while scaling profits 13%.

Financials have been a mixed bag: While revenues grew over 33%, profits fell 2%, largely on the back of an SBI that shrank profits by over 25% (and it has the highest profits and revenue of the lot, so its performance matters). Most PSU banks shrunk earnings but the worst was a 55% profit shrinkage from Reliance Capital. HDFC Bank and IDBI Bank grew over 33% in near earnings.

All banks grew revenues over 25% – a sign that with increasing rates, banks earn more. But the system hasn’t yet begun to see defaults, so the impact of slowing growth on the economy (and thus, on the banks) will only be visible after a few quarter.

Realty was the worst of the lot, with a revenue growth of a meager 4%, while shrinking profits 21% in the quarter as against Jun 2010. Orbit Corp and Godrej Properties saw profits fall over 50%.
The Dam is Holding

On the Nifty 50 stocks, an interesting pattern has begun to emerge: In the Jun quarter, 15 stocks showed a shrinking profit, with 16 showing stellar growth (over 25%). The “good” stocks are offsetting the “bad” ones; but how will this play out? 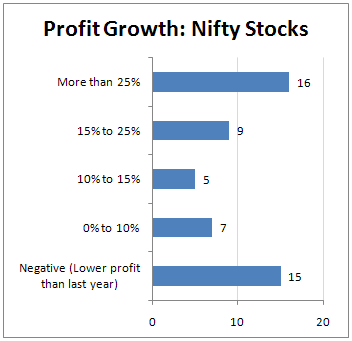 To conclude, we must see how interest costs are hurting the economy. How much more interest are our top stocks paying?  The cost implication is obvious: 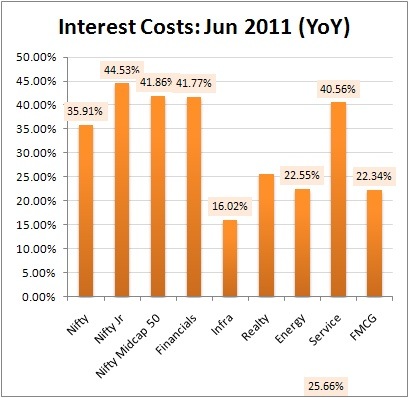 With another rate increase that came after the quarter ended (0.50% in July), and another one expected in September, where will profits go in the September quarter. I’ll keep you posted.