RBI moves rates up in it’s mid quarter review by 25 bps (0.25%) to 8.25%. This is a continuing anti-inflation stance that RBI has, which means raising rates until there are visible results on actual inflation. 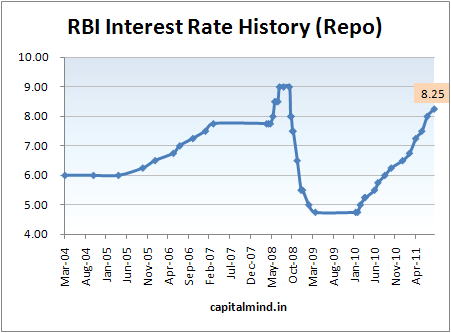 Inflation which is currently at 9.78% (See Article) is at the highest in a year. And worrisome is that inflation the biggest component, Manufactured Goods which is also the most persistent in that it is very difficult to reverse, is at a two year high (highest since October 2008).

And the end paragraph is worth noting:

As monetary policy operates with a lag, the cumulative impact of policy actions should now be increasingly felt in further moderation in demand and reversal of the inflation trajectory towards the later part of 2011-12.  As such, a premature change in the policy stance could harden inflationary expectations, thereby diluting the impact of past policy actions. It is, therefore, imperative to persist with the current anti-inflationary stance. Going forward, the stance will be influenced by signs of downward movement in the inflation trajectory, to which the moderation in demand is expected to contribute, and the implications of global developments

Disclosure: Have had a strangle option position that has turned reasonably profitable as I exit. I am likely to go short banks again, once the technical indicators show sign of buyer fatigue.