There’s a worldwide recession waiting to happen, and fears of it have struck markets everywhere. Pundits in India are saying that has a positive consequence; that oil prices will come down and with that, inflation, and with that, interest rates, and with that, the growth will return.

I find a disturbing trend here though, when it comes to crude oil prices. Crude oil has two traded standards – WTI (West Texas Intermediate, at Cushing, Oklahoma) and the European Brent. When you hear about oil at $88, they are usually talking about WTI. The two prices usually move together, but recently Things have changed since December 2010: 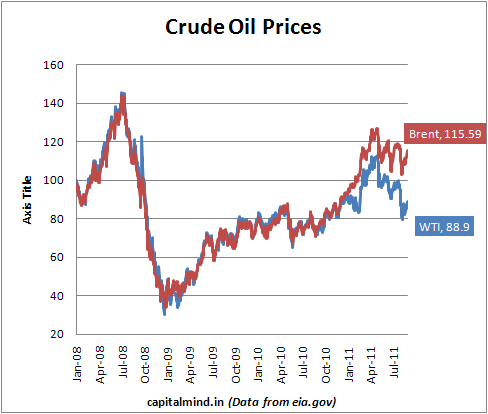 The spread has widened spectacularly if you look at longer term history: 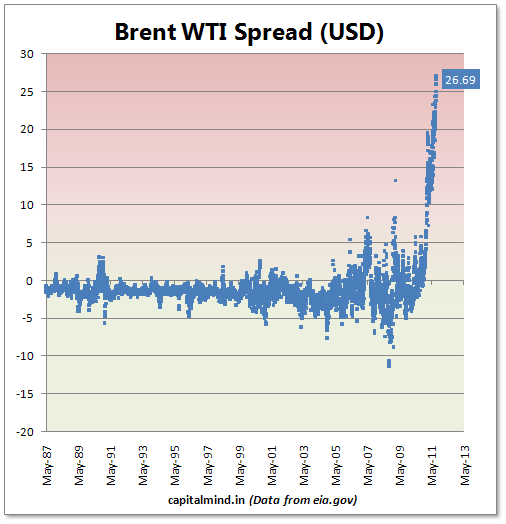 At $26.7 per barrel, the spread is just wild. Some say that’s because the WTI has too much supply with nowhere to go; Canada’s oil keeps coming into the US and depressing WTI prices, with no flow out to the Gulf of Mexico to send it outwards (till 2013). Lack of the clean Libyan oil due to the fighting, and issues in Nigeria and the North sea raise Brent prices.

The feeling is that the global recession will bring down prices, Libya will ease up, etc. But there are people who think the shift may be more fundamental. With oil production worldwide not exactly shooting up, a lower demand could be countered with even more lowered supply.

India’s crude basket is more skewed towards prices of Brent than towards WTI, and we purchase from a number of nations. Data revealed today (Sep 1) by the Petroleum Ministry shows a Crude Basket price of USD 112.4.

This sounds more like Brent linked, if it’s true. (It could be that the purchases are highly inefficient, since these are government bureaucracies of HPCL/BPCL/IOC) This means that unless Brent becomes more affordable, we aren’t going to see oil prices fall; inflation and interest rates won’t drop till then.

Secondly, since there are still underrecoveries – Diesel is priced at Rs. 4.57 per liter  less – the oil companies won’t reduce retail prices, which is what impacts our inflation. So the Brent price has to fall substantially – probably under $80 – for retail prices to come down.

That’s about 25% lower prices than current. Meaning, even if we drop 25% in terms of price, we won’t see retail fuel prices coming down. That puts the link between crude oil prices and our inflation into disarray, in the sense that a small fall in crude prices won’t change much.

From the beginning of the year, the USD-INR ratio has made the rupee less valuable by 3%. 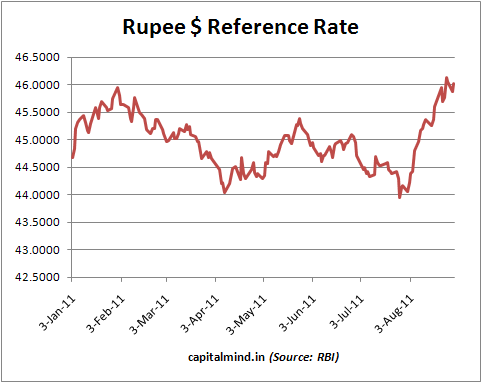 At a rate of 46.019 (latest from RBI) the equation means that India pays that 3% more rupees per barrel of crude imported. Put another way, imagine that the rupee was constant against the dollar, and instead of paying $112.4 per barrel, we were actually paying $116. Every bit of rupee depreciation will remove some of that crude price fall.

Conversely, if the rupee appreciates, we can pay lesser for fuel; but there is no appetite within the RBI or in the political sphere, to handle a rising rupee.

We should assume that energy prices will continue to be high, for whatever reason. Our core inflation – whatever has already seeped into wages, rents, services, and secondary products – will remain high for the near term, and I think we should expect more rate hikes.