At Yahoo I wrote about The Week That Was: (This comes on CM, delayed)

The Index of Industrial Production resulted in Index Reduction as the Nifty and Sensex fell over 3% after July IIP was announced at a meagre 3.3% after an 8% in June. The highly volatile capital goods number fell from the earlier months’ 38% down to -12% (Year on Year), surprising everyone even in the capital goods sector. Consumer durables and basic goods showed 10% growth while the rest disappointed.

This resulted in famous twitter users cracking jokes such as "IIO? IIP!" and others retorting with "Please do not miss IIN, in your quest to look beyond the IIM". We do not approve of such chatter though we will chuckle in private.

Greek tax collectors went on strike, along with customs workers and taxi owners. Greece has a large problem in that no one believes it can pay back its debts, except for France and Germany, who have vowed to do anything to help, except actually give it money. Small countries like Slovakia have short-sighted leaders who encourage Greece to default instead, and then leave the Eurozone, closing the door on the way out. With the 1 year bond reaching a ludicrous 138% yield, markets are going with the Slovaks. (Yields have dropped to 100) 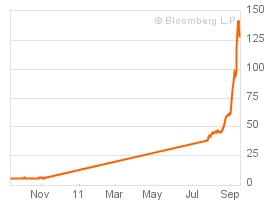 The ECB, the US Fed, the Bank of England, the Bank of Japan and the Swiss National Bank have come together to provide dollar liquidity to European banks, which is the kind of strong action that we need to see us through about three more days before the next round of panic sets in. Incredibly, the central banks believe that by pumping more money into a problem that was created, largely, by the pumping of money, we will miraculously solve our problems. That is like using alcohol to cure a hangover; you’ll feel better, but you know it’s going to get worse.

The Rupee fell to its weakest in 15 months, , with the 48 barrier close at hand. Exporters salivated at the prospect of getting more rupees for the same contracts. But the western economies are currently getting flushed down the toilet and customers, it is rumoured, might ask to pay with Greek bonds instead.

The Rupee has fallen from 9% from the 44 level in July, and it seems the fall has only been stemmed by RBI intervention in the forex markets.

On Wednesday, inflation numbers came in at 9.78%, higher than expectations but lower than the 10%+ that everyone secretly knows the inflation numbers are really at. Onion prices were up 45%, bringing tears to everyone’s eyes. Okra — or "Lady Finger" — is up 77% in a year, prompting the wrong kind of finger gesture. 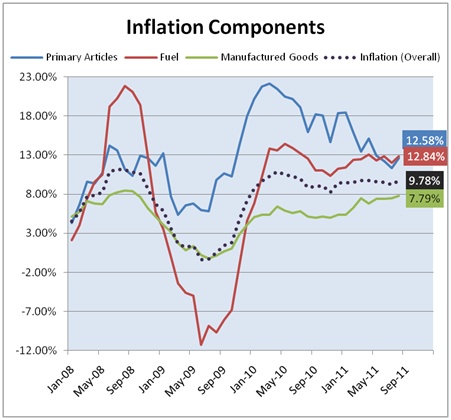 What’s worrisome: Manufactured Goods (Weight: 65%) are now inflating in price at a rate that is a two year high, with higher numbers only noticed in four months in 2008. Inflation is terribly difficult to reverse from the "higher" level items — you might let the prices of onions change every month, but once the price of your Masala Dosa goes up, it won’t come down anytime soon. The government responded to the high numbers by claiming that it was a conspiracy, because Anna Hazare’s fast was in August and so people should have eaten less. Apparently, someone ate a lot to compensate. (Don’t look at us)

After inflation numbers were announced, the markets went straight up, ending 1.5% up on Wednesday and 1.3% up on Thursday ending flat on Friday. Much of the upward move was bewildering for investors who believed, naively, that markets are dictated by logic. 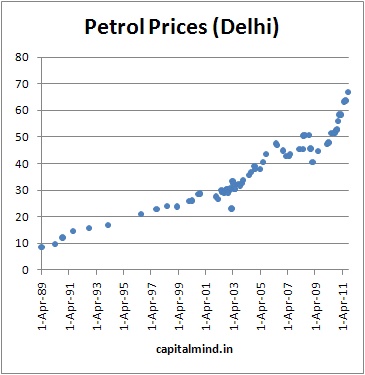 RBI raised interest rates by 0.25%. The raise was understandable, coming after a fairly big inflation number and takes rates to the highest in three years. While RBI admits a slowing down of the Indian economy, it states that persistent inflation remains a problem and a change in stance will result in diluting earlier rate hike action; expect more hikes unless inflation comes under control. 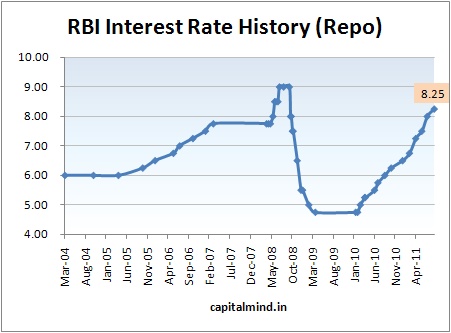 Moody’s downgraded two French banks, Societe Generale and Credit Agricole due to their exposure to Greece. The reports were denounced as completely obscure and illegible by the banks, who claimed that "it’s all Greek to us".

China says it will rescue Europe under some conditions. Which involve the recognition of China as a market economy, and thus reduce trade barriers, and to increase access to US markets for Chinese companies. However, it’s not clear who’s rescuing who; China holds a substantial portion of its reserves in Euro-area and US bonds, and the two areas are its largest trading partners. Eventually, it seems like China will pay countries if they will please continue to buy Chinese goods.

Union Bank of Switzerland (UBS), found unauthorized trading losses of $2 billion by a trader,
which could make them report a loss in the quarter. UBS may eliminate trader bonuses for the quarter, with a "claw-back" clause in contracts that links bonuses to profitability of the division. After being told that UBS is a Swiss bank, many Indian politicians are seriously concerned.

Union Minister Sharad Pawar expects our food production to surpass targets of 245 million tonnes, on the back of a good monsoon. A larger supply of food will also mean even more food will rot in government warehouses, ad Pawar calls for state governments to buy more at the higher minimum support prices to keep farmers and middlemen happy.

The Nifty went up 0.5% in the week, with the first two days seeing the market under 5,000 but recovering after Wednesday to a solid 5084. 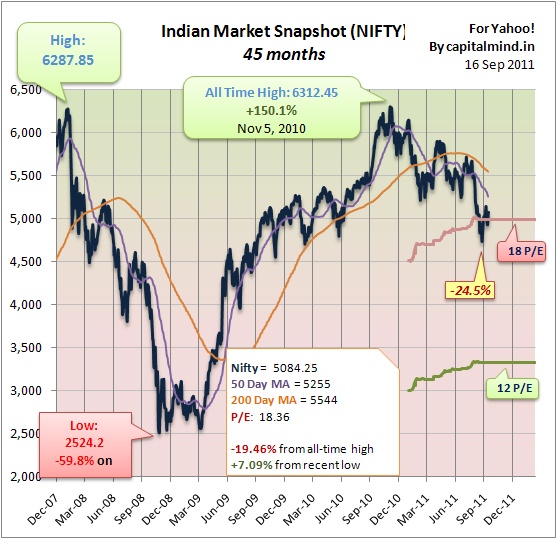 While we are above the 18 P/E line, the market still stays below the 50 and 200 day averages, and remains in a bearish trend. Technically the market remains in a tight range, between 4,900 and 5,100. 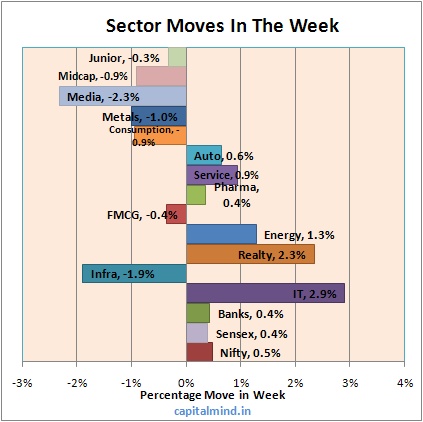 The VIX spiked up beyond 30 on Monday but returned to a more sober 28 on Friday: 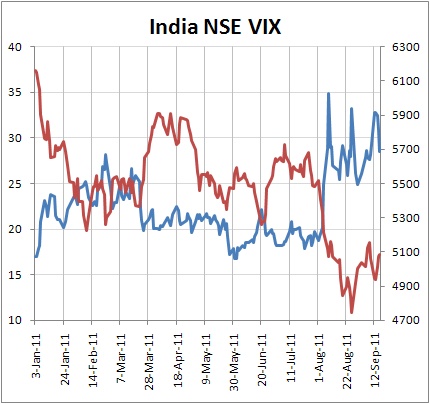 Net Volumes from institutions did not indicate much of a directional bias: 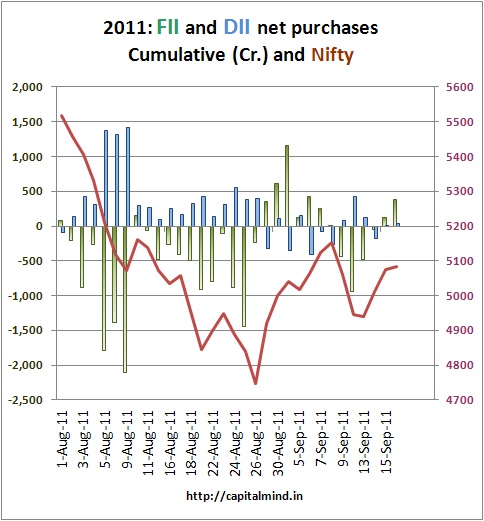 And a quick look at the best and worst of the week: 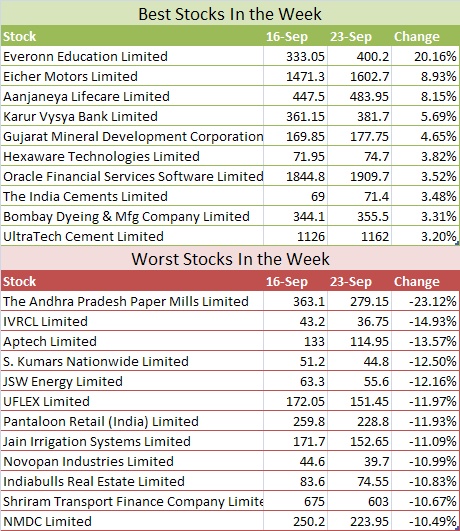 We keep getting asked the question: "What will happen next week?" The best answer we have ever heard is "Prices will fluctuate".  That is our prediction for the next week. Keep the faith.