A few interesting things to read over the 2-day trading holiday:

Italian town printing its own currency to escape austerity (Reuters)

Read @moneybloke about KS Oils, which has fallen a magnificent 80% in the last year, from highs of Rs. 80 down to Rs. 10 today. (Disclosure: I went long at 32. I ignored my stop losses on the way down and exited at an average price of 21 or so. But it  was a small position, so I console myself.) 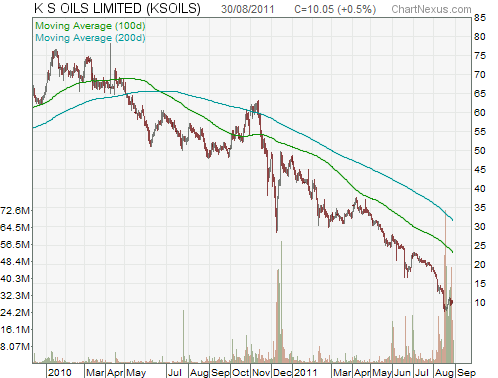 (Promoters pledged shares and financiers sold them as the stock collapsed). Directors have resigned. Rumours abound of the promoter losing his shirt on Palm oil futures. Risks to the Indonesian plantations persist, with some government bans that might happen. Tough stock to buy on fundamentals, except with a hope of a turnaround.

Ajay Shah: Only 20% of India has a household income of less than 60K per year. This is a result of a survey of 143,000 households, which I haven’t tested for integrity (i.e. is it diversified enough, how much urban/rural bias is there, is there cherry picking). But if true, this is revolutionary. That means the real story is that 80% of India is making more than Rs. 5,000 a month. This is going to rapidly increase consumer spends – FMCG, appliances, gas and all that. Oh, and stuff is cheaper now than Jan of this year.

Andrew Ross Sorkin on The Mystery of Steve Jobs’ Public Giving (NYT) There’s always a different standard for Jobs, versus any of the other really rich people, and Sorkin’s almost apologetic. Though it must be said that Jobs is suffering terribly these days and I hope he gets better and Sorkin, in that context, is all right to go easy on him.