Remember, Vodafone had purchased Hutch from the Hutchison group, for a valuation of $19 billion in 2007. (They paid Hutchison for the 67% stake they owned). Vodafone also bought out Essar’s 33% on 1 July 2011, for $5bn, which means a valuation of $15bn just one month ago.

I’ve been a vodafone/Hutch user since their crazy “Hello” ads in Bangalore in the early 00s, and stuck with them as I moved to Mumbai and then Delhi. They’ve lost the plot on data plans, but the voice is fairly decent. I think the price makes this a good investment but it will take years and years

Let’s do very basic valuations. RCOM, IDEA and Bharti are listed, so a quick comparison: 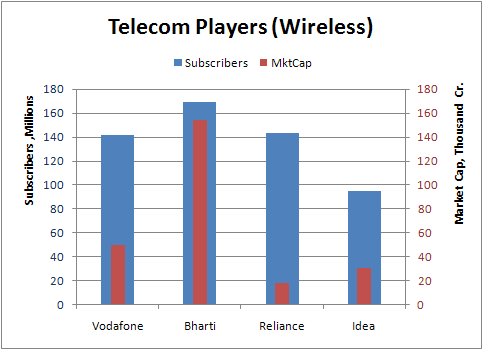 Note: This is NOT a very useful comparison. Because I don’t compare debt levels, profitability or the fact that Bharti and RCOM have interesting other businesses (Wireline, broadband and so on). RCOm, for instance is valued very low, but we know that it’s debt levels are massive, and that some of the 2G scam pieces are coming back to bite it.

All this very strange analysis is expected to do is to find out if relatively, Vodafone is a big enough player – it is, it’s #3. Second, are they overvalued at the purchase price – answer: we can’t say, what if there is debt like RCOM has. At a per-million-subscriber level, Vodafone’s valuation at this stage is Rs. 353 cr. (Or, around Rs. 3530 per subscriber). Bhartis is Rs. 914 cr. per million subscribers, and RCOM and Idea are 124 cr. and 322 cr. respectively.

Is this good? I don’t know. It sounds reasonable, and obviously the Piramals had access to more data. I also don’t know if this is the right thing for PIRHEALTH to be doing; I assumed the piramals would deploy the money into an operating business, not invest in bits and pieces like this. They’re also looking to buy a piece of some other financial business as well. If there is some logic here, I don’t know what it is. I gotta trust the promoter at this point; let’s see what the spiel is on TV tomorrow.

Update: Alert readers have posted that Vodafone HAD to get rid of some of the stake they bought from Essar to maintain the 26% Indian shareholding. Also, Vodafone’s planning an IPO.