The Markets today crashed comprehensively, but not deeply. With a fall of 2.2%, our fall is relatively nice compared to what European Markets fell today and what the US market is at. As I write, the indexes:

Indian stocks on US exchanges are getting pummelled though, as IBN (ICICI Bank) is down 9%, and HDFC Bank (HDB) is down 4%.

On our bourses, the market snapshot shows the extent of the carnage The P/E (historical, standalone) has gone below 18 for the first time since 15 May 2009 (the day before the massive rise in the indexes (“Post Election Upper Circuit”), when it was 17.34.

Effectively the market has died on us, and every sector has got hit hard except FMCG. 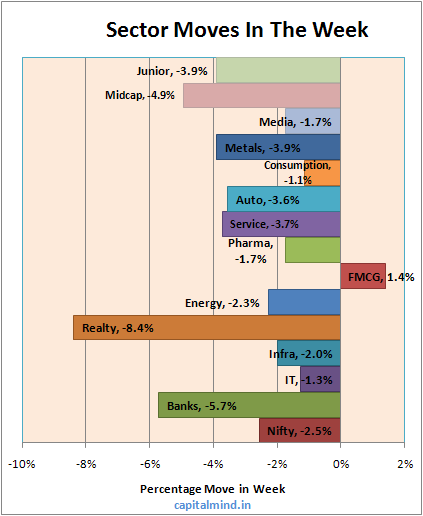 While Realty has fallen a lot, much is through DLF’s destruction after the Gurgaon order that it should pay Rs. 630 cr. as a penalty for having changed contracts and specifications unilaterally. The entire real estate sector does this commonly and a fine is a good thing; but it is likely to hurt their cash flow and perhaps could take a few players bankrupt as well.

I use a short term metric to see a swing, and that’s the number of stocks in the Nifty above and below key moving averages. Here’s the graph: Note that the both the red and blue lines are sloping downwards. A turn comes when they flip the slope, and it usually happens when the trend has exhausted itself. (and usually leads by a few days). We don’t have that exhaustion yet.

What’s causing the drama? Europe’s in bad shape. They’re not talking the language of markets – which want them to create a Euro fund so that Germany and France can rescue Italy and Spain. Which is nonsense because the taxpayers won’t buy the crap anymore; if anything, there has to be a bigger union, a EU government which approves each nation’s fiscal policy rather than the current loose monetary union. Otherwise we are better off seeing the Euro dissolve into its constituent pieces.

The US had a bad data day – unemployment (initial claims) stuck in at 408K, and existing home sales had slowed down compared to recent months. That has spooked investors, who ploughed money into treasury bonds.

India IS slowing down. I’ll have more concrete proof soon, but our interest costs are substantial, and we’re seeing some early slowdown news as well. There is no news from China, which means things are bad; good news would be on all news channels.

Should I sell? Should I buy? You have to stick to a plan. If the plan is to be long, then start getting in with a stop loss – there are lots of stocks that are cheap, much cheaper than earlier. Even NHPC, which started off its IPO as a 33 P/E behemoth, is now trading at Rs. 24 with a 10 P/E. (A good monsoon year means power generation will be good) That doesn’t mean it will do well, but the fundamental stories are looking good.

A trader should look to create short positions or ride them. The trend is all down. Playing for a bounce may  be worthwhile once the indicators show signs of exhaustion. 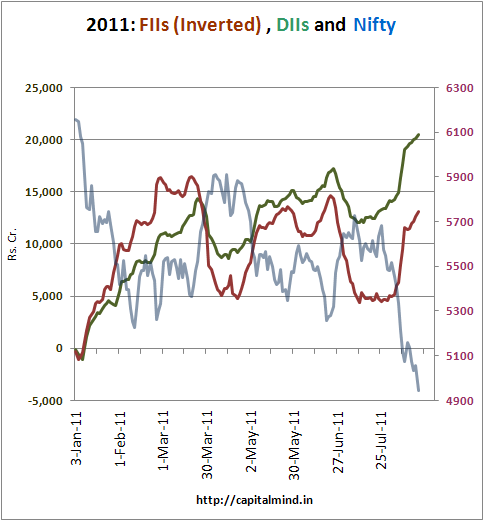 In my opinion: As long as market volumes are low – less than 15,000 cr. this fall will go further; it’s when real panic sets in that we will see the end of it. But I’ve been wrong before.

Disclosure: Both long and short positions on stocks and indexes.