How do we use cards in India? RBI releases a bulletin every month containing such data and we can see how much cards have been used over time. Additionally, I add commentary on other payment systems.

Debit cards, ever since the numbers have been revealed have gone way above the credit card numbers. The 24 crore (240 million) debit cards out there far outnumber the 1.76 cr. credit cards, a number that has been declining since 2008 January. 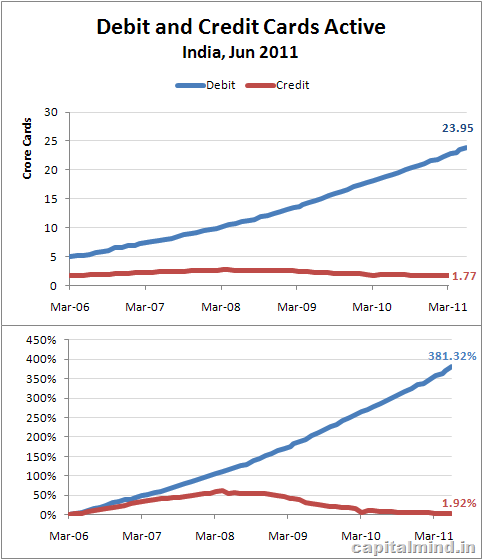 The fight has been won by debit cards, for what seems to be many reasons:

The verdict, on the transaction values, is clearly for credit cards, though. 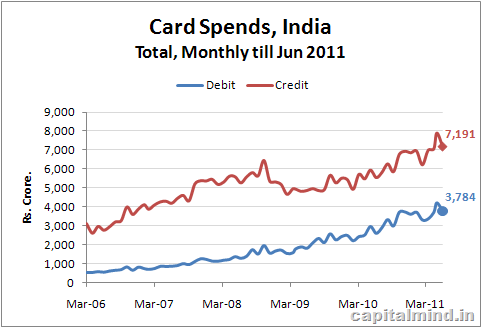 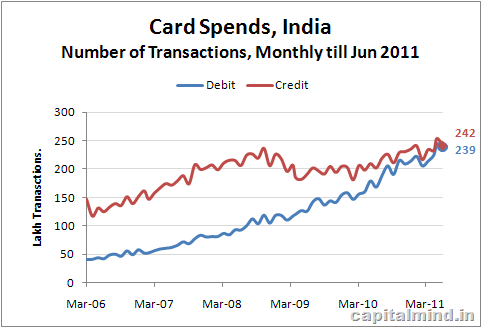 Substantially more – nearly 2x – is spent on credit cards. On transaction volume, they’re both neck and neck today. Remember, these are only transactions with a PoS in place. It does not include internet payments, from the language in the RBI report. 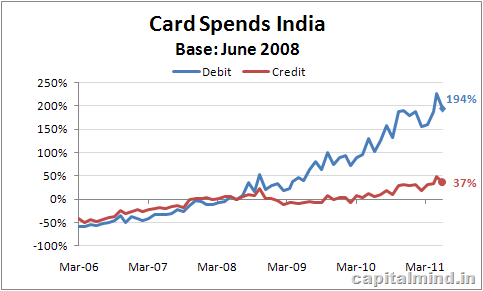 Card spends in India have moved up and debit card spends are up considerably higher than credit cards. Thoughts:

On a per transaction amount, the steady increase is slower, but credit cards continue to win. 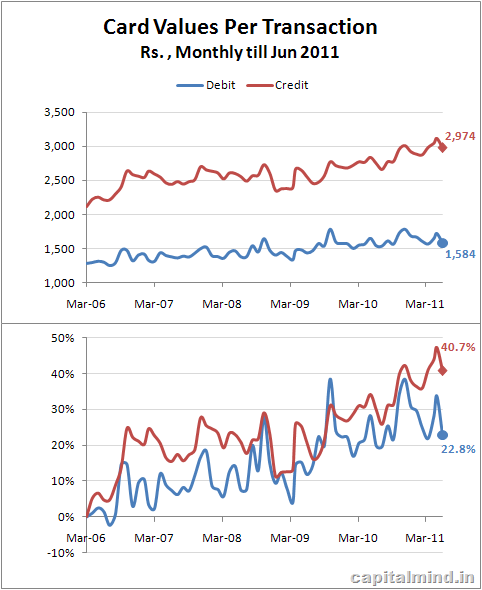 Credit cards do offer more protection (you can refuse your transaction, and the merchant doesn’t get paid from the card company – with debit cards, dispute resolution is more complex). Also credit does mean a period of free money before you have to make that payment, so you can plan finances better.

Yet, more and more people are realizing the horrors of rolling over credit card debt – rates can be as high as 42% a year – and the subsequent defaults or negotiations should keep growth at a low, especially in a high interest rate regime.

Overall, payment per transaction hasn’t grown too much – in five years, credit card payments per transaction have grown just 40%; which is just about keeping pace with inflation. It will be interesting to see if this metric changes; that is, will people use cards to pay for higher value transactions? Or will they use different transfer mechanisms?

There are other types of payments. (Focussing on user payments, not inter-bank RTGS, Clearing Mechanisms of using G-Secs as collateral or barter/repo systems)

While transaction numbers are good for Credit and Debit cards, the biggest chunk of value is in EFT, with over 80% of transaction values. Another 14% use ECS. Makes sense; EFT or ECS is used to transfer salaries by most corporates now, and for dividends, pensions, loan installments etc.

EFT is over 1.31 lakh crores (trillion). But even that has a big daddy.

Real Time Gross Settlement is HUGE. With over 34 lakh crores transacted in June 2011, it has the biggest scale of them all with 80% of total transaction value. Much of the inter-broker settlement on stock and bond exchanges happens through RTGS, as do many large payments. A timid second are cheques at 17%. Credit and Debit cards are a fraction of this, at 0.1%.

Where do we go from here?

For scale in India, I think we might not go down the credit card route. With the NFS, it’s very easy for us to use the banking system to pay electronically, and now they have managed to add a layer of protection for disputes as well (visible in Mobile transactions). Transaction costs come down to a fraction of a rupee (independent of transaction size) which will dramatically increase acceptance by merchants.

Mobile and other device based transfers are likely to become the norm, rather than credit cards. In fact, we can see from RTGS that purely electronic money moves are the way to go; physical card based payments are growing but remain a tiny blip in this huge market.

See how other countries fare in the payments space, with a report from BiS. (Thanks Aadisht, for the request!)