I’d mentioned yesterday that volumes were terrible. In fact the Nifty volumes (weighted volumes of the nifty constituents) are the lowest since September 2007: 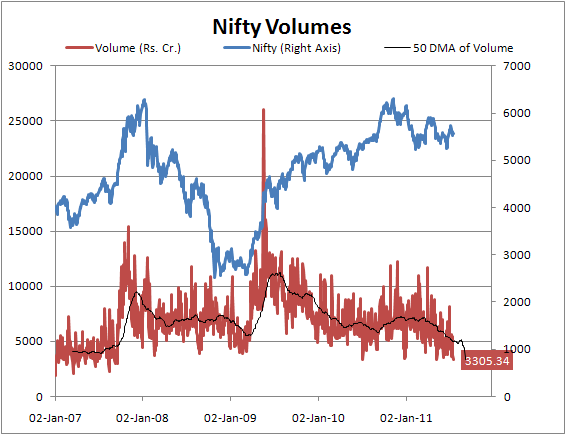 It’s been nearly four years, and volumes have just died on us.

Incredibly, I wrote this in September 2007, on this very blog, and now it seems prophetic:

The wave has just begun. The market is up nearly 6 days in a row and at this time, both the Nifty and the Sensex are reaching their highs. I think they’ll cross it comfortably.

But the factors that are negative: The subprime crisis hitting funds and banks in the US, it’s effect on Indian stocks – both tech that outsource from them and others that have LIBOR linked loans, the high interest rates in India, the price meltdowns in real estate, the dollan-yen-rupee equation; all of these are short term negative, and probably even long term negative, but they still continue to exist.

This is the beginning of the bubble. Doesn’t mean I’ll quit. I’m riding the wave – I’ve bought a large number of momentum stocks with a simple funda: a 10% trailing stop loss and a "ride the wave" concept.

At this point, for a wave riding exercise, there are a huge number of stocks available. But it’s all risky – I’m taking a measured outlook. If you want to do so please embrace the risk first.

Note: Before every steep fall in the market, there has been a euphoric rise. I believe this is that rise for us. If we go up hard, we will fall hard. I’m not sitting on the sidelines – no, that is giving up too much of this opportunity. I’m just giving myself a 10% cushion.