Infosys announced Q1 FY 2012 results today. In a dull quarter, they produced a Quarter on Quarter (QoQ) increase of 3.2% in revenue,  with net profits falling about 5% from the March quarter. The Year-on-Year (YoY) Net Profit growth printed 15% due to a lower Q1 last year. 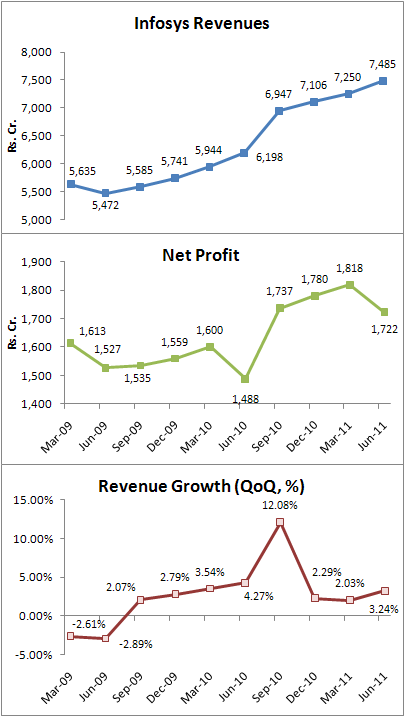 In general, Infosys profits have dipped, quarter on quarter, in the last two Jun quarters as well. The profit, this time, was lower due to an increase in the cost of sales, which one might attribute to salary increases that happen annually. But for a company that is valued richly, the growth on Earnings Per Share has been less than stellar. 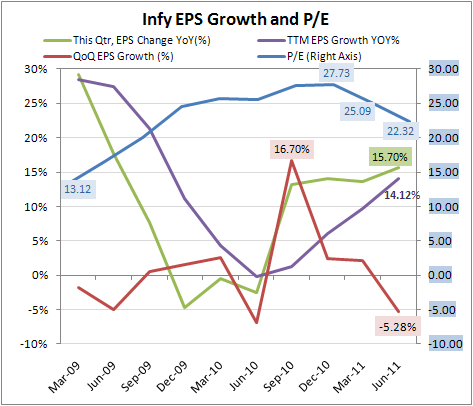 While Infosys has managed to grow the Net Profit figure 15.7% from last year, it was largely because of a huge dip in net profits last june. Come September, the company has the opposite problem — a spike up in results last year, so this year will need to be substantially better.

From a price to earnings standpoint, a valuation of 22 times earnings, even after the stock dipped 5% today, seems expensive. You would accord those valuations to companies growing fast, but not for sluggishness. The biggest year on year increase, in the last 9 quarters, was this time’s 15.7%.

The next and obvious question is: how do those earnings come? With less than 5% from products, the majority of Infosys’ revenues are from services. Services are based on employee strength, so let’s see how that’s growing: 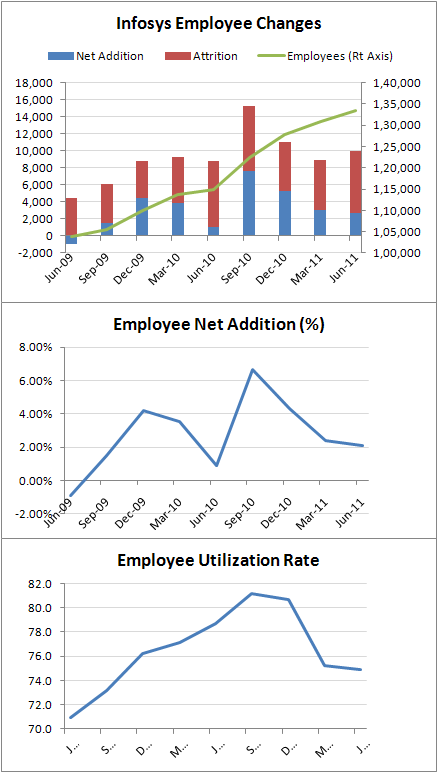 Again, this doesn’t brim over with confidence. While the total number of employees went up the net addition was just 2%. Even after hiring nearly 10,000 people, Infosys lost 7,182 people in the quarter to attrition, leaving the real addition at a new low. This could again be seasonal, since people prefer to leave in this quarter if they have to move cities (because of children’s schooling), but then they should be hiring more as well. The net addition of 2%, coupled with the lowest utilization rate in the last 7 quarters is a potential problem.

Now, it could be that they expand by increasing billing rates, or productivity instead of increasing manpower. For this the mix of their offering needs to change. Either they need to move into more fixed-billing projects (where your productivity gains translate to “same revenues, lower cost”), or for their time billed projects, increase the per-hour average rate. 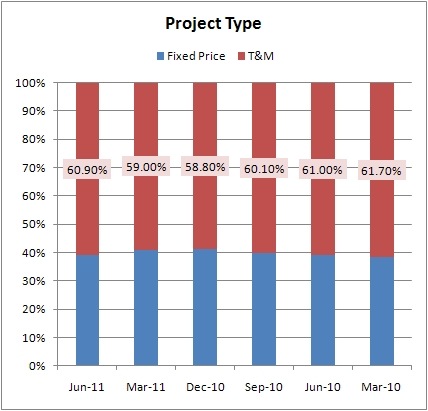 There’s actually a move to more time billing but the difference is marginal. This basically means they should be hiring more. We don’t know if average billing rates will change going forward; but competition will keep such price increases in check.

They might change their sector mix — get more from different kinds of services, which might pay more.

The change is only in manufacturing (increased to 16.1% from 13.2% last year) and a corresponding drop in telecom. Otherwise the sector mix is largely the same.  While there isn’t a defined trend today, the scale of dependence on one sector — Banking and Finance — is obvious.

Lastly, the Geographical concentration mix is useful to see: 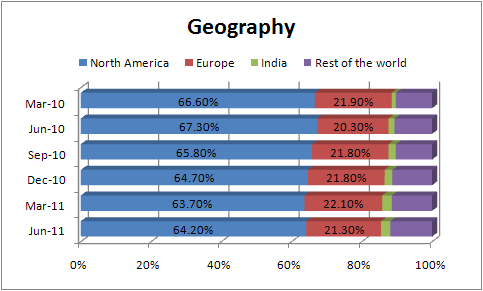 The focus on Europe and North America seems to be coming down, but very gradually. They still occupy about 85% of the revenues, and the looming crisis in Europe, which is likely to spread to the US, will remain a concern.

Overall, the result wasn’t expected to be stellar — if anything, the management’s guidance for this quarter was even worse(an Earning Per Share of 28, while they delivered an EPS of 30). The guidance for the next quarter is an EPS of Rs. 30 or whereabouts; and Infosys is known to give muted guidances (i.e. those they are likely to beat) so you could expect marginally more.