The markets opened down nearly 30 points after which the recovery came in, inspite of bad inflation figures. Towards the afternoon, they peaked nearly 1% higher after which TCS results spoilt everyone’s mood and the Nifty ended up just shy of 5,600.

Internationally, the drama continues. Greece will default in some way or the other. Ireland is now junk. Italy just took a beating issuing bonds at the highest yields since 1999. The US is shaky in that Bernanke made it clear that he wasn’t being called Helicopter Ben for nothing; he promised to flood the market with more money if there was as much as a sign of a sneeze. That money will come here, ladies and gentlemen, so it makes sense for our markets to get excited as well.

Technically, we sit between the 50 and 200 day MAs, and the 50 is below the 200. This is basically a no-fly zone and until something breaks – upside or downside – it’s not signalling a trend. Volumes at 11,000+ cr. today were higher, and FIIs continue to buy (Rs. 211 cr.). Supporting them were the domestic institutions at 518 cr. 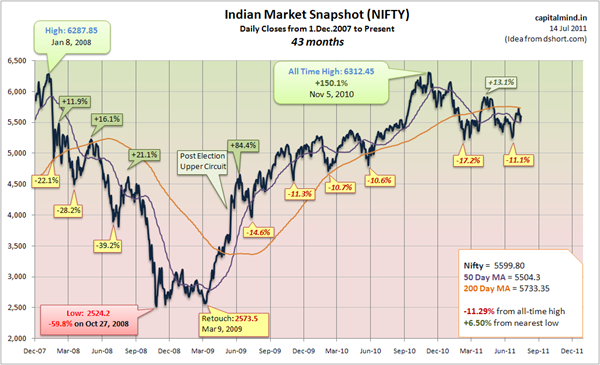